I was swimming around my apartment this morning, answering queries and gnawing on clients when I heard a very odd, rather splashy kind of sound.

I hastened to the apartment quadrant with running water (kitchen, bath, distillery) to see if a pipe had sprung a leak. Or perhaps a neighbor had sprung a leak. No, it was all quiet on the cistern front. But, yet, the noise continued.

I went to the window: nothing on the balcony fire escape but the usual assortment of deadbeat winged rats trespassing pigeons.

I was flummoxed. What could it be??

Then I realized it came from my computer! Yes, my webcam was focused on the Irene Goodman Literary Agency, specifically The Slithery One herself. Who was apparently NOT at her desk but dancing joyously in some waterfront dive bar --and here's the footage to prove it!:


Now you might wonder what got The Slithery One in such an ebullient mood. The cause was revealed moments later when a liveried footman arrived at my door with a framed copy of the latest STARRED review from Publishers Weekly for ♥ Sophie Littlefield♥

Much can be said about Miss Littlefield, but let's all remember, I said it first.

Here's not the last, but the latest:


A Bad Day for Pretty by Sophie Littlefield.
Littlefield’s rollicking second novel featuring tough-talking Stella Hardesty, who manages a sewing shop and doles out her own brand of justice to wife-beaters, delivers on the promise of her debut, A Bad Day for Sorry. (which, let us all remember is actually the EDGAR NOMINATED A Bad Day for Sorry!!!)

When a tornado uncovers a mummified woman buried at the Prosper, Mo., fairgrounds, the police suspect Neb Donovan, whom Stella once helped kick an OxyContin addiction, and Stella reluctantly accepts Donna Donovan’s pleas to clear her husband’s name.

Complicating Stella’s investigation—and her long-simmering feelings for Sheriff Goat Jones—is the arrival of Goat’s former wife, Brandy Truax, who has designs on her ex and a possible link to the murdered woman. With her plucky assistant, Chrissy Shaw, Stella must exonerate Neb while eluding the real killer.

Littlefield wields humor like a whip, but never lets it dilute the whodunit.

A force to be reckoned with, Stella is a welcome addition to the world of unorthodox female crime fighters. (June) 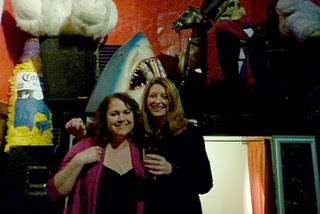 1. This sounds like a must read. Congratulations to both agent and author on such wonderful reviews.

2. Is that really a shark dancing?

I've said it before and I'll say it again...SOPHIE is the force to be reckoned with.

Congratulations! Now that is a good reason to go frolicking (yes, i know it's probably not spelled correctly) with the dolphins:)

all quiet on the cistern front.

Yes, yes, wonderful review, wonderful book, terrific character - but it's the above that makes it necessary for me to go change my undersilkies.

I'm sure this book will cause quite a splash.

Sounds like a "must read" - congrats to both author and agent :-)

I have to agree with Bernita, the review is cause for dancing but the telling of how you got to the review is really what makes me want to dance. And dance I shall.

I loved A Bad Day for Sorry and am excited that a new Stella book is on its way.

Your blogpost was a cherry of awesome on top a delicious sundae of amazing.

Dear Ms. Reid,
Okay, okay. Your enthusiasm for "A Bad Day For Sorry" has finally gotten to me. I have downloaded it onto my iPhone (I hope I haven't contributed to the downfall of publishing.) and began reading it tonight. Right off the bat, I like it very much. But if I may ask a question:
How important is a "hot" opening, like Ms. Littlefield does here? Hers is only four paragraphs and tells us a bit about character, but tells us virtually nothing about the story. It is a quick hook that hopefully whets our appetite for the coming tale. However, Tana French (just for one comparison example) really does not use a hook intro. Rather than hook us into the story, Ms. French draws us in more slowly, revealing information in small doses.

At any rate, thanks for your time and, always, for your insight.

That was wierd. why would a shark spin out of the water??