There's been a recent spate of queries from writers who don't want me to know who they are. (Sadly, none of them appeared to be from Idris Elba or Simon Baker.)


This is an almost instant pass for me (I'm not sure about other agents, you'll have to ask them.)


I'm all for discretion and certainly willing to have you query under a nom de plume, but not attaching your name or any name to a query just seems like starting off on the wrong foot.


I've also had people write to me and say I have to sign a non-disclosure agreement to read their query.


If you're absolutely determined that your identity must be a secret or you want someone to sign an NDA you're better off hiring a publishing attorney who also makes deals. They're out there, you just need to find them.


I can't help you if you're hiding. 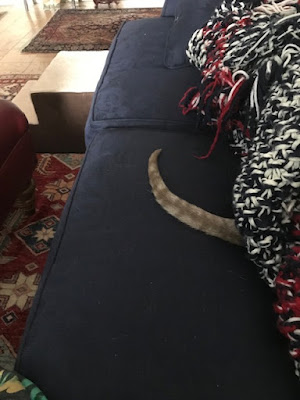 I'm not hiding. I am right here. I am who I am. Most days. I can wrangle cats. Most days.

Just curious, these queriers that want NDAs, do they claim any reason? Celebrity? Whistle blower? Spy? I can't think of a legitimate case where this makes sense at the querying stage where some publishing lawyer would not already be involved. But I haven't had my coffee and it took me 4 tries to find one letter in Wordle this morning.

Why would anyone in their right mind not want you to know who they are? Writers write for many reasons but a couple of them are because they have a need to and because, and lets be honest here, they want to see their name or their pseudonym, on the cover of a wonderful, published book. And even if it's their pseudonym, someone needs to know where to send the check! As to the NDA, that's just silly. Are they only querying one agent? Because no matter how hard you try, once something is out there, sooner or later, it's out in the universe and nothing stays secret forever.

I started out on the internet as nightsmusic (nm) when the internet was new thanks to a stalker ex husband who, to this day some forty years later, still will press mutual acquaintances for information. It's now become my nom-de-plume if you will. But if someone is savvy enough, they could find out who I am. This holds true for anyone.

This whole thing just seems so silly, no wonder you pass.

I've also had people write to me and say I have to sign a non-disclosure agreement to read their query.

Years ago, when my husband was still involved with dog training, a dog-training friend of ours wanted me to write a book for her. She wouldn’t give me any details until I promised to write the book. She hinted at scandal in the dog training world and wanted her name kept out of it. She said the book would be an immediate best seller. Yeah. Right. I declined.

Btw, is that a new couch or did you slip-cover the snot green one?

Well, would the author-want-to-be also require the publisher, booksellers, and readers to sign NDA? I've had people wanting me do things for them without compensation ask for an NDA or to sign a legal document. That's why we have receptacles for Waste Management.

I'm surprised there are a number of writers asking for this, but then again at my age nothing should surprise me.

What I want to know, however, do I need new glasses or are there three cats in this photo?

Trying to wrap my head around why someone wouldn’t include their name in a query letter. And, like Kitty, I wondered about S.G. Has Ms. Mucus (a pseudonym being used for reasons we can’t discuss here unless readers sign an NDA) gone even further under (slip) cover?

The level of ignorance and paranoia around such things is wild; I see it on twitter on a regular basis. Coming from a software background where I had to care about IP, and with my Dad's having been a college professor / researcher where IP matters. I admit that at first I had concerns. But it quickly became clear that the whole industry would have collapsed if theft was rampant, so at the very least, sticking with established agencies of good repute would be safe.

As for cats in the photo - what cat[s]? That tail could belong to any number of beasts, some of which are *not* of good repute!

Note: I never pitched the Shark despite your good reputation because at the time I had not seen your suggestion to query you even if a manuscript fell outside your standard genres.

Note: I don't think I'm a robot, but were I a robot either programmed to believe I were not, or an advanced enough AI, I would say I'm not a robot, anyway.

In my zeal to stave off Carkoon, I put freedom above publication and, when I was unable to come up with stakes in my query, I didn't want to be discovered. My French nom de plume of Manuscrit Frayon was sure to be de-crypted. It was all me, I tell ya.

I may not have signed with the Shark, but I'm still not eating kale.

A few years ago I spent some time on Query Tracker's forum. One particular developing writer was also working on a query. She'd post one and I would read it, think about it, and when I was ready to offer my meager post the entry was gone.

It happened a couple of times and, finally, in a PM, she said that she was afraid someone would steal her idea.

I tried to explain that a digital footprint is admissible in court, so leaving it posted would be a help, not a hindrance. Queries sent out are the same, they prove it was your idea.

She didn't believe me.

Yikes, it's astounding how so many people lack basic social skills and common sense!

If an agent signs an NDA, does that mean he or she cannot send it to publishers?

I can understand some writers using pseudonyms (I would've had to do so a long time, if I'd written a certain book I thought about writing, but was stupidly talked out of doing), even where only the agent knows. But doesn't a real name have to be on the publishing contract (if not the agent representation one)?

Are these people writing nonfiction? If so, why not write under a pseudonym?

Gosh, they must be new to the query trenches. Or think they have the most-amazing-idea-ever-and-it-will-make-millions-so-secret-squirrel. I guess it makes managing the slush pile a little easier because they would have to be a form no. I think Craig F is probably on the money - these people don't understand IP, copyright etc.

Coming in a few days late (always!) to say that I'd been approached by a person asking if I would either mentor them into successful freelance editing or if I'd pass projects their way. Same situation: I was allowed to refer to them as Mrs. and a letter.

Nope. Nope. Nope. I need to know who I'm dealing with and who I am speaking to.

Later, I learned that Mrs. P--- was actually a married couple, husband and wife. It's been years and I still don't know their actual names. At this point, I don't care to, either. Freelance editor-author relationships are hard enough when you DO know who you're dealing with...