You're looking quite chipper! 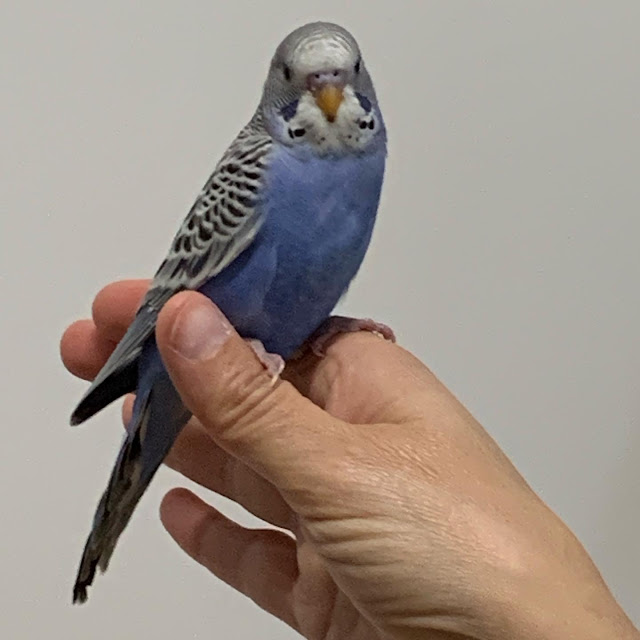 This is Number 1. She (or he?) is the eldest in their clutch, and just graduated yesterday from aviary to house, so I can hand-raise her before she goes to a forever home. When this occurs, she'll be replaced by Number 2, Number 3, and so on. We currently have 4 budgie hens raising chicks of between 3 and 5 babies - and another budgie hen who is sitting on 9 eggs at last count. And why yes, that is indeed a lot of chirping!

The dearth of names is intentional. My daughters, 13 and 15, who assist me (when they're not doing homework or on their phones) would love to name them  and keep them all... but they don't pay for birdseed!--K.Ridwyn

When I worked in the outback I'd sometimes lunch at a particular billabong. What I loved about it (apart from the fact there were trees to provide shade) were the flocks of chittering budgies that also liked the billabong.

In the wild, their natural colours are only ever yellow and green, but they "talk" as much in the wild as they do in captivity. They're very noisy!

That little cutie reminds me of a blue parakeet I had when I was five. His name was Pete and he was a talker. When the phone rang (which it often did with two teenagers in the house) he'd say "Hello" on the first ring "Helllooo" on the second and "Will somebody answer the GD phone!" on the third (Dad often worked night shift).

I spit my coffee out because you'd just said you number your birds and then your daughters are numbered...

Yes, I know, that's their ages, but it was funny to me.

I also would want to keep them all, which is a tremendous portion of why I never want to get into dog breeding. Because I would be ALL IN with dog breeding; getting the dog to his/her championship, the health testing, maybe working titles on the back end.....and then, after all that sweat and tears, SELLING those puppies? MY puppies, in somebody else's house? Nope. (though I do think Ulrike would be in heaven if we got her a puppy...she's made friends with a 5 month old Shih Tzu(

I'll bet all the chirping is quite cheerful! I once had a budgie who looked much like #1 there. She loved chickweed, and I had a plentiful supply so it worked out well.

Cute birdie. I was hoping that Number One was a Star Trek reference.

Back in the 70's Tampa had a huge colony of feral Budgies. Just about every traffic light had at least one nest of them. At times you would see a tree that was going to seed completely covered with them.

Then Nanday Parakeets showed up. By the 80's they had completely supplanted the Budgies. You can still see an occasional Budgie out in the wilderness, but their urban excursion is over.

That is a shame because they had a cute chirp, while Nandays chirp is closer to a screech.

Back in 2010, I started an degree in IT. During a course on Web 2.0 I quickly decided that I'd keep my children's names/photos etc off the internet as much as possible. So it's an ingrained habit now, to write 'Miss15' and 'Miss13' and 'Master almost12' - so it never occurred to me that the numbers I use to indicate their ages are the same numbers I use to identify the order in which the baby budgies hatch! (I also realised that I forgot the 'Miss' before their ages in my email...)

Sorry everyone! nightsmusic - I hope you didn't get coffee on your keyboard?
Steve Forti I didn't! My children have 'normal' names, I promise. CynthiaMc That's hilarious! Jennifer and Beth Thank you! He ended up going to a new home last weekend, with one of his brothers. He's now named Sid, and together with Smee (great names, don't you think?) they're busy enthralling their new owners with their antics. Barbara Thank you. And I never thought of the Star Trek connotation, even though I *do* like that show :) And AJ Yes, we're fortunate to have budgies as native animals here, so can listen to their chirping whenever we want. Makes me sad, Craig F that you don't have as many any more. And thanks for your comments, everyone :)