My human was muttering yesterday about you feeling despondent over being confined indoors. My human is what your kind call an "introvert" and does not understand that lack of societal interaction might be undesirable.

I am writing to commiserate and to ask for urgently needed help. I have heard that all your top scientists are working on ways to allow humans to resume "normal" schedules, ones that allow you to regain outside access. I propose that one of them, perhaps even two or three, could be spared to work on solving my similar dilemma.

As you can see from the attached pictures, ALL THE OTHER CREATURES in my neighbourhood are allowed to roam freely.

Earlier this spring, the large squawky birds taunted me. 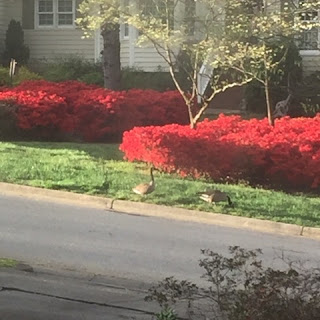 For weeks, the hoppy fluffy creatures tormented me. 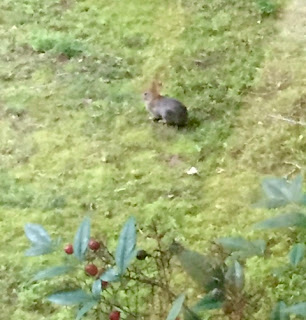 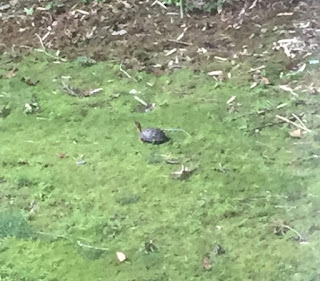 Even this oddly-shaped doggo, creatures who are normally a friend, got into the act. 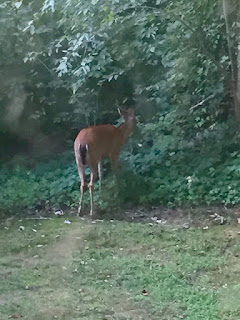 But now, well, now this has gone too far. Just look at what I am expected to endure, and at close quarters. The racing-striped mouse! 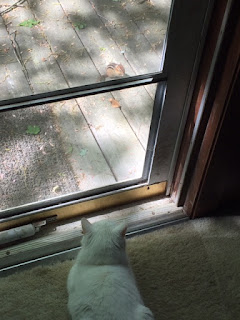 My human has insisted for YEARS that I must stay inside with her "where it's safe." Safe for whom, I ask you? How long will this go on?

I sense you are a kindred spirit, even though you cannot possibly comprehend a lifetime sentence of this unreasonable limitation. Please send help in the form of someone who is willing to hold open a freakin' door just long enough.

Yours in claustrophobic doldrums,

Cauliflower,
aka The White Ninja,
aka sweetest cat ever 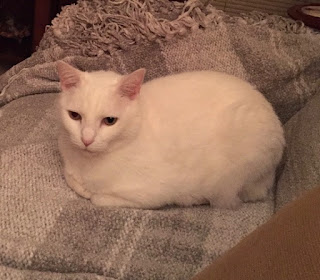 Don't listen to her. She's a fierce predator as well as a known flight risk.

Yours in protective pet ownership,

What a pretty ball of white fluff! *I'm sure she'd hate to hear that ;)


After yesterday's pure black, we now have pure white? Wow.

That was some menagerie you have there in your neighborhood K.D.

Poor cat. But oh so lovely.

My first cat, Spirit, looked like this White Ninja.

And I have lots of those race-striped mice in my yard, competing with the squirrels at the bird feeders.

I can't figure out the five words we have to use, but regardless, I adore your photos, KD. What a neighborhood!

I feel for you, ninja.

Ebony and Ivory.
I presume you’re hitchhiking west to pick up Jet.

Cauliflower is an adorable mass murderer. I'm sure she would dispatch the racing striped mouse given half a chance. One of the serious issues I have to think about before finding a successor to Mehitabel, is whether to allow the kitty the freedom of the outdoors. They do love it so. I do have an enclosed outdoor cat yard, accessible by a window, once said kitty is large enough not to go through the chain link fencing...
I'm not quite ready.

Cauliflower is a brilliant name. I hope it doesn't snow where you are, KD, or all Cauliflower would have to do to hide is close her eyes.

Yep, lots of entertaining wildlife around, thanks to the little stream that runs through the neighbourhood. Sorry about the blurry pics. *Someone* needs to wash their windows.

AJ, Cauliflower was named by the whitewater rafting guides in the NC mountains, where my daughter found and rescued her. She responded to that name, so it stuck. She earned the title The White Ninja with her ability to disappear and reappear elsewhere moments later, without anyone having seen her move.

Panda, we've had two mice get into the house through the basement. She played with them quite thoroughly.


[This was written before the most recent sad news, but I hope reading the silliness of a cat's complaints about enduring her "lifetime quarantine" provided a few moments of levity and distraction. She's currently sleeping on my lap, so life isn't ALL bad.]

Constantly amazed at the turtles and tortoises wandering by.

Constantly amazed by KD and her amazing friends too.

No one else could call such a beautiful girl Cauliflower.

My cats where all born feral, so they are beasties. Two of them go out and guard the yard from the rest of the feral kitties that are jealous of them.

Only our tuxedo cat is almost a house cat, maybe she needs to see a chipmunk or two to get back to her roots.

NM, it's a letter written from the POV of the cat, so she supposedly (in MY imagination anyway) doesn't know the names for geese, rabbits, turtles, deer, and yes, chipmunks. Definitely an attempt at humour. :)

May I interrupt this tribute to the lovely Cauliflower, cat among cats, defender of the house against all mice, stripy or otherwise, to bear (or should I say bear cat?) glad tidings! On this day a new baby panda has entered the world in Washington DC.
Huzzah! Excuse me while I go rejoice!

KD, gotcha. Sorry. Not the day for me to be ferreting things out yesterday.

NM, no worries! Even on a good day, my sense of humour can be a bit weird to figure out.

NotMyCat is deeply shocked and troubled at the plight of The White Ninja. She says that the poor cat's human should be aFG$#@DFCVBh;kloiuhhhhh.

Sorry. In her agitation she leapt up onto the keyboard and tried to express her feeling directly instead of dictation. Rest assured, TWN, help is on the way. Watch for the squirrel. He'll smuggle in the message detailing plans for your escape.

Uh oh. I'm in big trouble if NMC is getting involved in the "rescue." But wait, she's sending escape plans via squirrel-o-gram?

Whew. By the time your cat herds the squirrel all the way across the country from the west coast, I will have moved into the new house. Probably.

Note to self: Do not give Evelyn the new home address.