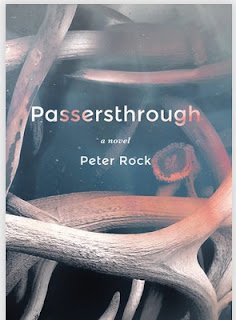 Years ago, when I was in junior high, my English teacher said we could have extra credit if we went to a play being offered at the local college.   I wrote down the location, day and time; my folks dropped me off at the theatre and said they'd be back when it was over. (this is not the start of a suspense novel, they did come back!)

I went in to find no one in the lobby. I opened one of the doors to the auditorium expecting it would be empty as well. But, no, there was a play in progress on the stage.

I found an empty seat in the last row and settled in.

It was utterly surreal. I had NO idea what was going on. The actors were speaking English, I recognized words, but what they were saying eluded me entirely.

An hour later I crept back out of the theatre, waited for my folks and said "I'm not sure what that was."

Turns out it was Hamlet. I'd gotten the day and time very wrong.

I mention this only because I read the description of Passersthrough, and then I read the book, and realized I'd travelled back in time to that auditorium.

Passersthrough isn't at all what I was expecting. But this time I recognized Hamlet.

Have you read a book that wasn't what you thought it would be?

That book for me is A Little Life by Hanya Yanagihara. I came in expecting to read something like Secret History and instead came up against Misery, Misery and More Misery.

This post is just perfect for a Monday morning - always nice to catch a glimpse of the Young Janet, and it is a story- with a beginning, middle and end (the last line a killer - "this time I recognized Hamlet" ) - and in keeping with Janet's mission to educate writers, there's an important lesson in there too.

I just started Whalebone Theater expecting it was a murder mystery about a theater group.

Not exactly the same, but your story reminded me of high school when I went to see a movie with a couple of friends. We walked into the theater and the movie was already playing. We were a few minutes late, figured it was coming attractions. The show was making less sense than Hamlet.

Turned out we'd walked into the wrong theater and caught the last twenty minutes of Picnic at Hanging Rock instead of the movie we had planned to see. (I don't remember what movie we intended.)

Since we'd seen the end of Picnic, we figured we'd stick around and wait for the next showing and watch it the whole way through. The second time I saw the twist coming.

Just about everything written since the Bard's time has been touched by his work. Some works are basic re-writes and some are a bit more eldritch, the question is in seeing the parallels.

I'll give this one a try, just because my Queen brought it up.

Confession: While I love a story with clever twists, subtle misdirection, and surprising elements, at the end I want Fred to pull off the mask and Velma to explain how the trick was done. I have a feeling this is not one of those stories.

That reminds me of the time my husband and I went to see Weiner Dog at the movies. I was not long postpartum and feeling fragile. The lady at the front desk said it was a funny movie about a dog.

To this day I remain traumatised.

I too enjoyed this little snippet of kid-Janet.

In school, my sister and I were so stressed out that we decided to throw studying to the wind late one Friday night and see a feel-good sports movie at the local university cinema. 'They're all the same,' we said. So we got coffees and walked downtown to see "Million Dollar Baby."

After a moment of shock at the ending, and a small 'hey did that just happen', we started laughing. Like, bend over, stomach-hurt, wiping your eyes kind of laughing. I'm sure people around us thought we were psychopaths.

Ironically though, it was a great stress relief.

NLiu - just looked up that movie. Will now scrub it from my mind!

to my utmost relief, when I was visiting family just after the new year with the Only Physical Copy (at the time) of my debut novel, Exit Ghost, my aunt read the cover copy aloud to the dinner table and my uncle said "oh, it's Hamlet!" My family is one of readers (though not typically genre readers) but you just never know XD

I once read a book that turned out to be called Frannie in Pieces, but I hadn't paid much attention when I picked it up and kept wondering when she was going to get to Paris.

I blogged about the experience last year.

I went searching through the Libby catalogue for Karen McManus's "You'll be the Death of Me." Libby couldn't find it, but recommended a title called: "Does this mean you'll see me naked?"

After clutching at proverbial pearls, I took a closer look at realized it was a funeral director's reflection on over 30 years in the death industry. I checked it out immediately and loved every page of it!

As a young child with some Greek heritage, I was very interested in Classical Studies. I'd read pared down, kid-friendly versions of the adventures of Odysseus, and knew that the character was also sometimes referred to as Ulysses. (You can see where this is going, can't you?) By the time I was 12, I had read both The Odyssey and The Iliad. So, at 13, when I saw a book called ULYSSES on my local library shelf, I popped it on top of my mother's pile of books for her to check out. Well, I couldn't make head nor tail of what Mr Joyce was on about, nor how it had anything to do with The Odyssey. In my defense...again, I was only 13...and a couple of years later (with the secret help of study guides) I re-read it and LOVED it.

NLui, I just looked up the movie. Oh my gosh, no story I have can beat yours. I can only imagine the trauma from that movie :(