When World Events Intrude on Your Plot

I guess timing can be everything. I am at the querying stage for a historical fiction manuscript. Unfortunately, recent events have stopped me in my tracks.

The story takes place between 1941 and 1943, a great bulk of it in Nazi-occupied Ukraine, as well as in Soviet Russia.


I don’t want to give the impression to an agent that I’m trying to profit off the current war in Ukraine. This is not my goal. Obviously the manuscript took more than a year to write, and I will absolutely shelve this story if I have to until that conflict ends. As it took a lot of historical research about the holocaust and of the then Soviet Ukraine, that area of the world has become near and dear to me. The Russian invasion and their senseless brutality is atrocious.

Should I wait or should I continue on querying?

One of my clients, Dana Haynes, and I joke that the CIA/NSA should read his early drafts so they know about upcoming hotspots in the world.

More than once his novels have been set in places that subsequently hit the headlines for all the wrong reasons.


There are some events for which any query could be "too soon." 9/11 was one for me. The Pandemic is another.

But both of those are my personal opinions and not to be taken as an industry standard.


You're not exploiting the current catastrophe in Ukraine for your own ends.
Query with a clear conscience. 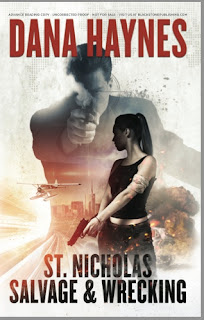 Ugh, if I'd written a book in that circumstance, I'd want clarification too. Glad to hear you can happily hit the trenches, OP. Good luck!!

So if a couple of grouchy dragons wake up and start destroying the world, I am SOL with my current book? Give it a week. It'll happen. I had to shelve my post-apocalyptic fantasy because well...2020 and so forth. I do wish the world would just stop all this non-sense and sit down for a couple of decades and create and relax. Let's have a little boring for a while, shall we?

I've been wondering about stories written 'in the present.' There are still various COVID restrictions around the world. Do I acknowledge COVID in a story or push the timeline back to pre-COVID days?

Speaking about Haynes & being consulted by the government... In 2005 I read about a group called Analytic Red Cell, an elite group of writers and artists who dream up terrorist scenarios for the Department of Homeland Security. Brad Thor was one writer who participated in that group back then.

Or should I forget about COVID in a story that's written in the present? I mean, if it doesn't affect any of my characters, why bother?

Unknown, do you watch the BIG BANG THEORY? Then you might recall Amy Farrah-Fowler reciting this bit of Chaucer:

"'Thus swyved is the carpenter's wyfe;
And Absalon hath kist hir nether ye
And Nicholas is scalded in the towte
This tale is done, and God save al the rowte'"

It seems to me this is too subjective an issue to give clear one-size-fits-all guidance. A recent survey says that only 9% of Americans believe the pandemic is still a serious issue. From that, you may think it's okay to query pandemic-themed novels. However, you don't know how many of that 9% are in publishing. And it might also depend on the nature of the pandemic novel. If your story involves a deadly pathogen on Carkoon... sorry, bad example. Carkoon *is* a deadly pathogen. Let's say, a deadly pathogen on Xeron 5 that makes inhabitants break out in boils, that may be removed enough from Covid to be acceptable.

It's also true that some people will never be comfortable with some topics. New York-based agents who lived through 9/11 may never want to read a 9/11-related novel. They may be okay with thrillers involving different kinds of terrorism, as long as it's not too close to that particular event.

Bottom line? I don't know that you can predict how an agent is going to react to your novel. It's not your business to know the various traumas and triggers for each agent. I'd say (and I'm not an agent) write a great novel and an excellent query, and don't be offended if an agent rejects it immediately because it's not a topic they want to read.

Back in the dawn of time, as it pertains here, when friends said I should try writing for real; I came up with an uber plan.

It would be about the rise of my main character. Three thrillers would show his growth from an environmental field person, to an inventor, to forming the Company, numerous iteration of the name have come and gone, currently named Bridger.

Then I would step off into sci-fi. The Company would start that with creating a new dawn of transportation.

Then the thriller market flooded. I went to the sci-fi thing. The main contention was between the main guy and a new President, because setting up that new dawn of transportation took longer then the friendly Prez was in office.

That new Prez looked way to much like our past Prez, and the contention looked contrived.

Time for a new uber-plan.