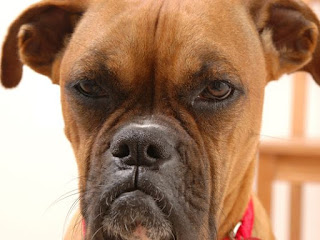 I missed a contest? Drat. Penalties of being in vacation with little signal.

Ooooh, Janet posted a photo of me today, yay!

It is me, definitely. When I had to pull out from tomorrow's tennis earlier this morning. I am so very gutted because my left knee is hurting too much, maybe I won't be able to play in the winter league where I was going to play matches against other counties.

I didn'trealise, Janet, you snapped me this morning, pahahaha. 🤣

Looks like Mr Forti was thwarted! Obviously this is why the Shark is back this week: her spies detected Forti's absence. And Steve thought the goldfish was on his side. Tsk.

(And you don't have to post every day, Janet. We're not going anywhere, posts or no.)

Thwarting Steve Forti was my goal of course.

oh indeed Brian H you did get the reference!

How'd you get a photo of Gus?! So...I have a cousin who hides her identity as a Janet represented-writer. Whodathunk? (jk)

Gee, giver her waltzing with bears one day, and the next she looks at me like that. I can't win here.

Missed the return of Janet and I missed a contest. Ah well, I'm here now and hoping I haven't missed the whole party. Lovely to "see" everyone and read all the comments. I really should have been cooking dinner, but the family's hunger comes second to swimming in the reef - it's been a while. *waving* hello to you all until the next post when can jump in the comments with everyone :)