My novel used to be a short story. Is that ok?

I have a never-queried novel manuscript that was 14k and is now a 70something-k novel. The original novella was part of a short story collection that was once available on Amazon and in print on an extremely small scale. I can't seem to find particular rules on agents' query rules about whether I can or shouldn't query something like this. Can I? How should I warn them about the situation in the query? The only thing I've been able to find positively is that Pitch Wars would accept it over a certain length--they state a percentage of increase for acceptable submission.

What you need to include is a line or two about the origin story of the novel. Something like when two short stories love each other very much "the novel began as a short story that was part of a collection available on Amazon."

The reason you need to tell them isn't because of some need for transparency (which is a vastly over rated thing in queries and life in general) it's because your publishing contract will have a phrase like "material has not been previously published."

That wording can be negotiated out (I've done it more than once) BUT your agent needs to know up front.  You don't want to spring it on her when she gives you the final negotiated contract.

That's the same reason you tell an agent if you applied for copyright for the novel.

(Do NOT do this by the way)

It's a whole lot easier to negotiate this ahead of time.

No, the bear yesterday wasn't praying.

I always think of it as Mr. Burns in a bear suit. 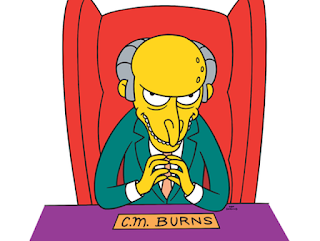 
I have a Jetreid flash fiction entry that has grown to 107k words. Sadly it is currently in perpetual editing.

Stay well out there in the Reef.

Hey, Hank! There's an interesting thought: Would that flash fiction story be considered published and need to be mentioned in a query? I understand that if you post a story to the webz it's considered published. But what if it's a 100-word flash story that has become a 100,000-word novel? I think the novel would be substantially different enough to be considered original. But what do I know? I'm not the agent around here... 😀

There are (mostly litfic? I think?) novels that have come out that I remember reading the shorts as O. Henry prizewinners, or in the New Yorker, or whatever.

The Girl Hamlet novel I'm querying started out as a 100 word story for one of the flash contests here! I haven't been mentioning it in query letters, though, other than to Janet, who at the time had said "Special recognition for entries that weren't quite stories, but if they were
the start of novels, I'd want to read on"

I am feeling super spoiled right now. Is this 4 for 4 this week? I want to cry I am so happy at seeing another post.It makes the world feel a bit more solid again for me.

Colin Thanks for response yesterday. I have missed you.

I miss you all. Although, I have nothing to add to this post. Many of my book ideas started as short stories. Just not published short stories. So there you go.

I thought I was writing a short story but it turned out to be a novel. Whoops.

Also SUPER HAPPY to see yet another post! It's like finding extra Christmas presents under the tree half a week in a row! Yay!

Eeek, I am going backwards; one of my novels is spawning short stories.

It's real nice to see all these names again, kinda gives one a little normality in an otherwise changed world.

Reminds me of that great line from Apocalypse Now...

"Never get off the boat." ...perhaps until it reaches Carkoon!

Nobody make any sudden movement.

No, the bear yesterday wasn't praying. I always think of it as Mr. Burns in a bear suit.

I'm back home among friends =)

Hank: It says something about the times we're in when my name is associated with "Normality"... 😉

Just want to pile on and add my gratitude for more activity on this site. It feels right.

Yay! So many posts lately! I’ve missed this.

I saw your statement not to copyright your material. The 1976 Copyright Act applies to original works whether published or unpublished, as soon as created and put in any reproducible form. The work does not need to be registered with the USPTO to be protected under state and federal copyright laws. Formal registration with the USPTO is beneficial in that treble damages and attorney fees for infringement, inter alia, are available. And, moreover, copyrights can be assigned to a publisher, so I am very curious about your statement.