While we do have animals (three cats, two goats, two turkeys and down to around 23 chickens), they're not really pets, they're farm animals. 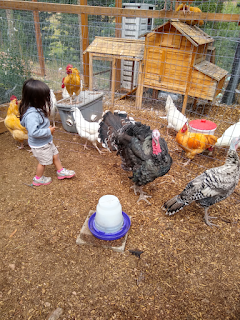 My garden is my 'pet'. Imagine my dismay when today (sept 2) I heard they are predicting an inch of snow next week. Not all my produce is ready to bring in. Not all of it can be protected from below freezing temps. Hopefully the predictions will change. I'm not ready to lose my garden. My poor baby watermelon will never have a chance to grow. 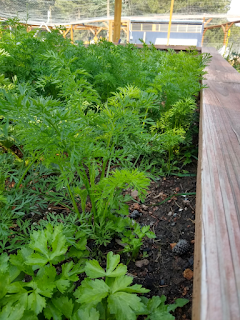 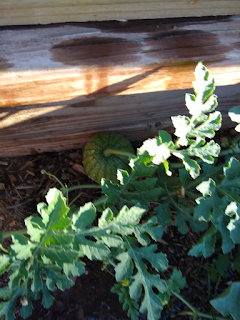 I fully understand having a garden as a pet.
Miss Green et al don't talk much, but they do provide a very serene kind of companionship.

This is why I don't have farm animals. They would all be my pets and I would be a vegetarian.

My garden (not considered my pet) has all but stopped producing. I have a lot of green tomatoes and a few peppers. I pulled the cukes a couple weeks ago now because they never do well. I have no idea why I keep planting them. We've already had frost a few times and while we won't get snow yet according to the weather, this next week is supposed to be only in the 50's for a high temp.

Today, I picked a bunch of green roma tomatoes, sliced them up with some of the peppers, and have cold pack canned them as pickled veggies. First time I'm using the age old method rather than hot bath canning. If they don't pop, I'll stick them in my already overcrowded fridge, but I'm hoping they pop.

The Noise In Space said...

I have a spectacularly black thumb. I bought two orchids: I drowned one and accidentally set fire to another. I bought a little yellow flowering thing--never stood a chance. I bought several succulents and they all died. The only plant I have managed to keep alive for more than five or six months is a little haworthia (I think?), which is an even weirder story: I had just purchased her right before I had to evacuate NYC in March for quarantine. Somehow she survived with no water at all until I got back up to her in August; now that she is safely back in my care, of course, she is doing much worse.

It's the strangest thing--she keeps growing up and up, stretching so tall and so fast that she's getting these weird white stretch marks, but she won't grow out the way she's supposed to. So now she's too tall with too narrow a base to stand on her own, so she keeps flopping over. All the pictures I found online of this plant have pointy leaves that stick outward, but not her. I can't understand it.

Noise, she needs a bigger pot. Two inches in diameter bigger from what she's in now. She's root bound. Put some pebbles in the bottom of the new pot and use a sand/soil mixture. Tip her out of her current pot, put her in the new pot, make sure she's not sitting lower in the new pot, put the soil/sand mixture around her. Give her a little bit of water, you should have a drain plate underneath her pot. As soon as you see the water in the plate, stop. Then just water her every other week, just a wee bit, until you see that drainage again. Also, you can use a couple chopsticks to make a bit of a tent that will prop her up without having to tie her to anything. Just trap her between the sticks, sort of like /\ that configuration.

In a burst of indefatigable goodwill, my peppers and tomatoes have put out a flurry of new blossoms. I don't have the heart to tell them what's just around the corner.

Still trying to talk the bell peppers into giving four to six more decent sized fruits. it is time to put in the fall garden, but I am hoping, of course the white fly infestation isn't helping. The weather has been so brutal all I can spray them with is neem oil, anything else would burn them.

The beefsteak tomatoes are finally flowering, they just stared at me all summer. I guess we will have red tomatoes this winter.

Orchids: If you buy them in a store also get some bark media and a bigger pot. They come rooted in Sphagnum Moss because they are raised in a mist house.The orchids will drown if you water them in the moss.

One last thing that is growing is my time in a fast boat. Medical schnitzel kept me out of it too long. I wish it was just like a bicycle.

We tried growing watermelons last year. We got several little melons but they just didn’t get any bigger. By the end of October they still weren’t ripe, so we turned them into jack-o-lanterns. They made much better pumpkins than watermelons.

Laying the groundwork for spring! I’ve planted 3 flowering trees (redbud, viburnum, and witch hazel) and a rambling rose in the past week, and am working on 2 new flower beds before my garden catalogue shopping spree comes to fruition and I have to figure out where to put everything. Meanwhile, the last of my Roma tomatoes are stubbornly refusing to ripen so I can sauce them.

Noise, c'mon, you can't leave me hanging like that! How did you accidentally set fire to an orchid?

The Noise In Space said...

Wait hold up--you mean to tell me it wasn't my fault they drowned??? Amazing!

Thank you all for the tips, I will try repotting the lone survivor tomorrow.

And as to the fire--well, it's really more of a concentrated sunlight blast, I suppose. I knew plants liked sunlight so I thought, as a treat, I'd move my plant right onto the windowsill to reaaaaaallly soak up that vitamin D. I left for the day. The day was overcast and hazy. I thought it would be fine. I came back to find a huge hole scorched all the way through the leaf. Clean through it. Singe marks around the sides and everything. I was living in NYC, so my best guess is that the sunlight was reflected/focused by one of the nearby buildings. All her leaves fell off within a few days after that. I did not know that could happen, but I've kept my plants clear of the windowsills since then.

See, this is why I like pets. If a pet doesn't want to be in the sun, it will simply move.

Noise, what a story!!

We also live in a flat, so no garden. I have tried growing herbs and they always die. Our strawberries produce leaves and no fruit. In fact, the only things that thrive in our flat are florist kalachoe. I highly recommend them for hot flats and forgetful plant owners. They seem to thrive on neglect, rewarding you with endless flowers for your lack of care.

We also have a window box outside on the cool half of the flat, and I've managed to keep roses and chrysanthemums there, alive but ugly. They're right next to a sink so I remember to water them. Also, the rain helps. I tried to branch out to carnations but failed miserably.

It's probably a good thing we don't have pets.

Oops, I meant kalanchoe. See, I can't even name my plants correctly.

Indoor plants are not the same as outdoor plants. It is entirely possible to be great at raising one and terrible at the other. I can garden quite well. Put a potted plant in my house and it's days are numbered.

We didn't get one inch of snow. We got eight. We had prepared enough to save some of the plants, but several perished. Such is the gardening life.