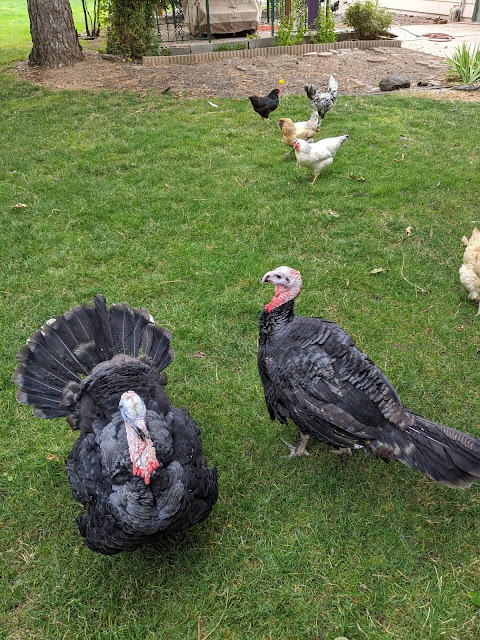 I got two turkey chicks this spring and duped a chicken into raising them.

They're growing into splendid creatures, in a hideous kind of way, and are much weirder than chickens.

They also didn't come sexed, but even with my deeply questionable poultry-gendering ability I'm starting to think that Majordomo, there on the left, is a boy.

The one on the right, Her Dread Majesty Queen Faux-Megapode I of House Snood, Scourge of the Arthropods, Dread Mistress of All Behind The Domicile, may also actually be male but slower to develop. I kinda hope she turns out to be a hen though; with a name like that you can imagine how much it cost to get her stationary printed.

How great is this! And I love your names.

At a previous home, I had wild turkeys in a backyard (bordered a wildlife park area) and was fascinated several times to watch a tribe of about 12 fly into the oak tree to roost for the night!

So much to learn and do and say! I love the turkeys' names. And OP's name, which includes "hen" adds an interesting element to this fowl post. That's "fowl," but certainly not "foul." Thanks, OP, for encouraging me to add those two words to my list of homophones, homonyms, and homographs. Someday I might do something with the list. Also, thanks for supplying new words for me--had to look up snood and megapode. Megapodes--such fascinating creatures! And all this name business has me wanting to give a listen to Johnny Cash's A Boy Named Sue, which I'm about to go do. And this is what happens when I sit down to work on my novel and I say, "I'll just read Janet's blog first."

Aaaand now I want to read an entire book by Karl Henwood. (Is that really your last name? With all those birds running around?) Get busy, sir!

They both look male to me. At least, they look nothing like our turkey hen.

Oh my goodness I LOVE the turkeys' incredible names!! What fun, Mr Henwood - if that is indeed your real name...

(Yes I know it is because we have all heard of Dweezil but couldn't resist!)

Bet that hen was surprised!

This is fabulous! I love turkeys. We have a small band of wild turkeys that spend time in our yard. We call them trudgers because they trudge to the east side of the property then trudge to the west side and back and forth they trudge, all day long. They have such quirky personalities. :)

If they're both males, you could just call them Mutt and Jeff for short. Would save on the stationary ;)

Don't make Dread Majesty Queen Faux-Megapode I of House Snood, Scourge of the Arthropods, Dread Mistress of All Behind The Domicile the protagonist in one of Janet's flash fiction contests. "Not quite a story" will certainly be in your future.

Oooh, fun fact: velociraptors were actually about the size of turkeys, not the hulking things from the Jurassic Park movies. Which means they were significantly less intimidating and could, in fact, be punted if they were naughty.

If Jurassic Park decides to do a more accurate reboot, perhaps your turkeys could land a role. All they'd need are some prostheses, and after filming, you'd have quite the attraction on your hands!

That's all for Fun with Paleontology -- now back to your regular scheduled programming.

Definitely both males. We bought three unsexed Americauna chicks and put them in with our hens. Two grew into very rude, crowing roosters. Eventually, we had to move them to their own coops. The third Americauna chick, Rose, now alone with the hens, raised her previously tucked tail, and her fuzzy cheeks, and CROWED! He totally fooled us all. So Rose now protects our hens while they free-range in the yard. And poor Stella and Hawk live in their bachelor pad.

Definitely two males, they both have snoods.

I am heartened when I see wild turkeys, but I have bad connotations with the current type of domestic turkey, the white ones.

If you think sheep have a death wish, those ugly white butterballs are worse.

Back when I was still in the environmental business I had to go the North Carolina. Hurricane Floyd wanted to be a mountain climber and tore a path up the mountains. In xe way were a lot of pig an turkey farms.

I got up to a turkey farm and saw thousands of dead birds. The farmer told me that they had drowned themselves by looking up into the rain until their lungs filled up and they lay down and dies.

Our very urban neighborhood boasts a flock of badass wild turkeys. Most days the best part of the neighborhood Facebook page is the turkey report, although we also have some delightful foxes, possums, bald eagles, Cooper's hawks, and one intrepid albino squirrel.