I returned to Paris last month while France was still under quarantine. From the beginning, it felt like I had stepped into a post-apocalyptic world.

Under normal circumstances, every seat on the plane would've been taken, but these are not normal times. I had the entire row to myself and there was no trouble finding overhead space for my carry on. 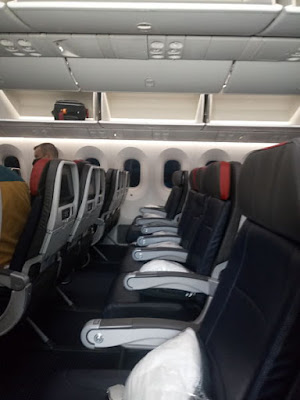 At the airport, Charles de Gaulle, there are trains on the lower level that take passengers into the center of the city. Not one person was to be found. 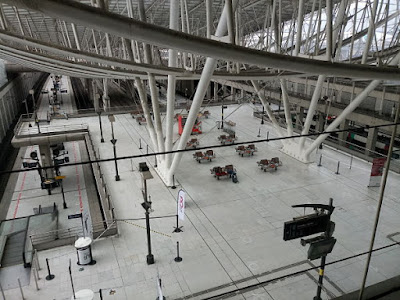 Patrick with my suitcases in one of the almost empty halls. Only the Vigipirates were there to check that 'everyone' was wearing a mask. 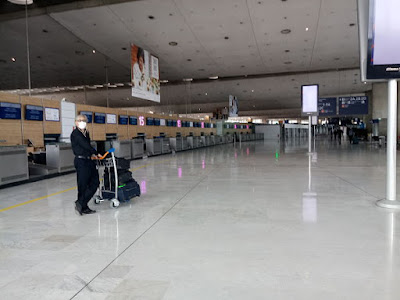 In the evening Patrick and I drove around Paris, a warm summer evening normally bustling with life – there was none. We passed the Eiffel Tower lit with no one to admire her but myself. 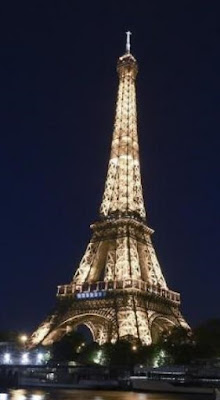 We drove toward the Louvre; the Seine was as quiet as the boulevards. No Bateaux-Mouches filled with tourists, no flashing lights from cameras or cellphones capturing a moment in time. At the Pont des Arts, I watched a young couple admiring the view of the Île de la Cité while another couple strolled toward the Left Bank. Four people on the walking bridge where crowds of people would normally be.

The cafés were dark, the quays and the boulevards empty. Seeing Paris this way was more than a shock, this was Paris after all. It was almost summertime and the Coronavirus had done what sub-zero temperatures and snow covered grounds in the midst of winter could never do – stop Parisians from going to the theater, the cinéma, strolling the streets, or meeting friends in cafés and restaurants.

We arrived at the Place de la Concorde. Never had I seen this place empty of cars and people, but there wasn't a single car or person in sight. I had the strangest feeling I had stepped into the Twilight Zone. On the Champs-Élysées, two people on electric foot scooters made their way down the large avenue with only a small amount of traffic as we headed toward the Arc de Triomphe. I told Patrick, let's go home. I had seen enough for one day. 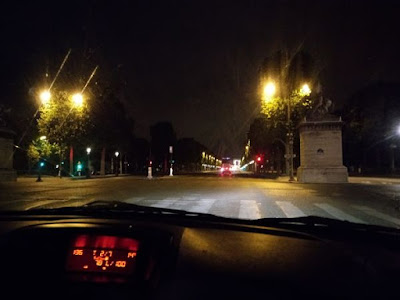 Thank goodness Paris has slowly opened up once again and life has come back to the city. Every person on the bus had a mask on. Seating is staggered unless you're with someone. 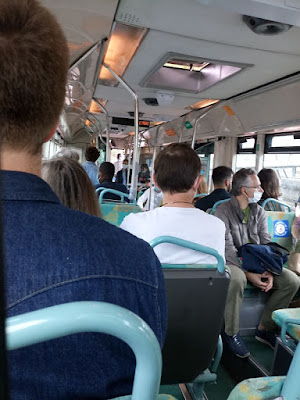 This was the view outside from the back of the bus 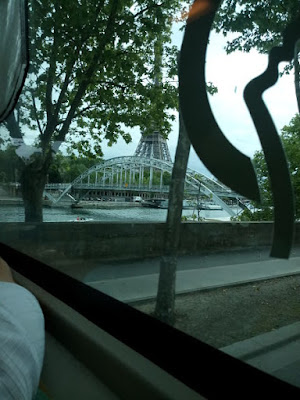 It's a different story near the Pompidou Center and other touristy spots. Many people wear a mask, many don't. 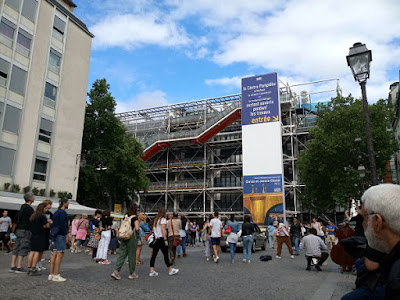 But, at least, life has returned to Paris. (Saint-Eustache church near Les Halles.) 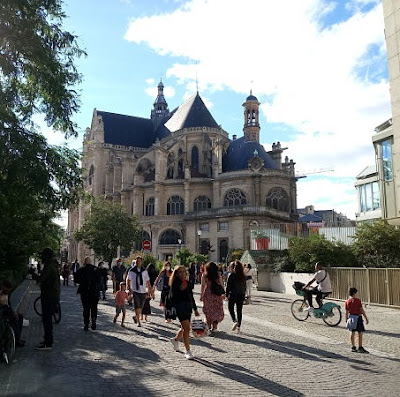 And the cafés and terraces are coming to life once again.

I can't imagine how strange it must have been to see those empty streets and spaces, Lynn. Glad you made it back safely and happy to hear things are looking up over there. Saint-Eustache church looks impressive!

Glad you made it home, Lynn.

Empty Paris is like a wedding reception with a cake but no guests - but those pictures of the cake really are beautiful.

So glad you're okay, Lynn, and things are slowly getting nearer to normal for you.

You're brave. My Keds are still glued to the floor.

Thank you for sharing these amazing photos, LynnRodz! I'm glad you're safely home.

Awesome photos Lynn and glad you made it safely home.

I'm so jealous that you get to say, super casually, "We drove toward the Louvre" "...on the Champs Elysees..." and to finish it off with "Let's go home. I had seen enough for one day." Just fabulous.

Thanks for the vicarious ride through "strange" Paris.

No wonder that the air smelled so deliciously clean for a couple weeks.

Hope your favorite little grocery/bakery stayed open for your daily walks there.

What lovely photos. Thank you, Lynn.

I'd never heard of 'vigipirates' and was very excited (for twenty seconds before I googled) that there were vigilante-pirates running around over there.

Glad you made it back!

Glad you're home safely, Lynn. Thanks for the photos and for letting us enjoy visiting Paris with you.

I spent a few days in Paris when I was a teenager. Magnificent city. I absolutely cannot imagine it with vacant streets. What a thing to experience!

Lennon: I think google led you up the wrong tree.

In France Vigipirate (Plan Vigipirate, acronym for vigilance et protection des installations contre les risques d'attentats terroristes a l'exposif )is the National security alert program. It is tied in with the national police and that act as agents during the alert.

Wearing a mask is mandatory and the national police enforce that in Metropolitan areas,

Thanks, everyone. It was such an eerie sensation. I had never experienced anything like it, especially in the summertime. France is the number one destination in the world and there are more tourists than citizens. (90 million vs 67 million.) The streets and cafés are always filled with people day and night. As we drove through Paris we must've seen a total of 13 people. It was sad and strange to say the least, but I'm sure all of you and everyone else around the world have similar stories. Stay safe. I'm especially worried about family, friends, and you Reiders who are in the States.

Craig, you're exactly right and yes, I'm happy to say both my grocery store and bakery are open.


Welcome home Lynn. I hope you can make it down again... it is deserted until next week when the English Invasion happens. All my best to you and Patrick.

Thanks, Hank. It'd be great seeing you and Cindy again (and perhaps meet Tanja.) Patrick and I have talked about it as we have no big travel plans for this year.

Lynne, it must have been eerie, but what an opportunity to get photos of landmarks without a person in them. I'm sure that would never happen normally.

AJ, it was eerie and I did take a number of photos, but I'm really lousy at it. When I paint or draw, I see more than the average eye, but when I have a camera in hand all that goes out the window.

We can't wait to go back.