I've decided all new clients must have a cute pet. Turns out pet pictures are the best way to stay sane during challengeing times.
To wit, meet Greg Levin's new puppy Wallaby: 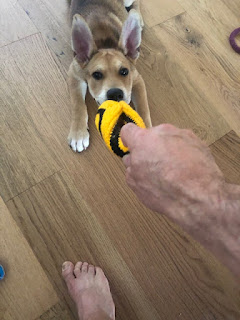 2. Use these words in the story:

(NO Steve Forti extra prompt word this week. I have retired from the field of battle. Forti Thwarts the Shark!)

3. You must use the whole word, but that whole word can be part of a larger word. The letters for the prompt must appear in consecutive order. They cannot be backwards.

5. One entry per person. If you need a mulligan (a do-over) erase your entry and post again. It helps to work out your entry first, then post.


7. Titles count as part of the word count (you don't need a title)

8. Under no circumstances should you tweet anything about your particular entry to me. Example: "Hope you like my entry about Felix Buttonweezer!" This is grounds for disqualification.

9. There are no circumstances in which it is ok to ask for feedback from ME on your contest entry. NONE.


Example: "I just entered the flash fiction contest on Janet's blog and I didn't even get a lousy t-shirt"

11.. Please do not post anything but contest entries. (Not for example "I love Felix Buttonweezer's entry!"). Save that for the contest results post.

12. You agree that your contest entry can remain posted on the blog for the life of the blog. In other words, you can't later ask me to delete the entry and any comments about the entry at a later date.

If you're wondering how what time it is in NYC right now, here's the clock

If you'd like to see the entries that have won previous contests, there's an .xls spread sheet here http://www.colindsmith.com/TreasureChest/

(Thanks to Colin Smith for organizing and maintaining this!)

Ready? SET?
Not yet!

ENTER!
(side wagers on when results get posted!)

Now, let's see if I can get the results up by Monday!