I once mentioned my friend bought a Bernese/Pyrenees mix. Well, apparently they're like potato chips because she just got another. Never not 300lbs of dog. Note that Ludo, the older one, kept his absurd ear poofs; his ears are floppy and flat against his head in this photo.\ 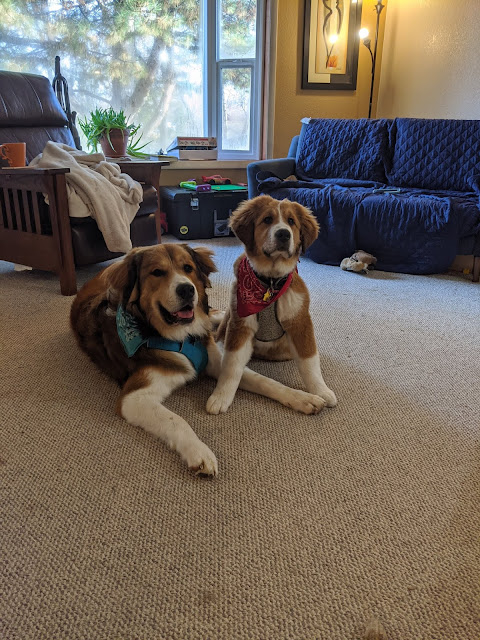 Next, I keep getting robocalls from a New York area code, and while wasting their time long ago ceased to amuse me. I have a full manuscript in line for a read from a New York agent so I answer....

With that in mind, once I go full Jack Reacher and hunt down whoever is responsible for this telephonic pestilence, is it still acceptable to drop them into a plain old gasoline powered wood chipper, or should I use something greener like a tank of starving piranha? Or perhaps army ants? I know publishing as a community is very environmentally aware, and I wouldn't want to commit a faux-pas.

Also, lest you worry, I won't use sharks. Sharks are too good for them.

OP - Let the phone calls with the NY area code go to voice mail. If it's telemarketing, you've saved yourself some aggravation. If it happens to be from a very special NY agent, you may have a delightful message telling you she'd like to talk, which you can replay over and over.

Beautiful pups. Ludo! Cute name. And who is the new one? Name, please.

Wasting idiot caller's time is losing its luster for me as well. A wood chipper would do the trick though!

300 pounds of dog?!?!?
Wow.
Are they puppies? They look adorably snuggly, and not so huge in the picture.

Melanie, the little one is named Kartouche.

Luralee, yes, they are both still puppies. Even ludo isn't anywhere near full grown, he's still a gawky adolescent whose legs keep getting longer overnight.

Absurd ear poofs make the dog, as they say.* Ludo and Kartouche are magnificent puppies and I would love to pet them both. Thanks for sharing, Karl :-)

May the robocall center experience an invasion of zombie ground squirrels who chew through the wiring and render it inoperable.


*not really, but they should!

Smiling puppy faces--the perfect ending to the year. May 2020 bring you all peace, prosperity, and more to smile about.

Biggest dern potato chips I ever saw, cutest too, for the moment.

I have had a couple of sporting dogs that starting eating things like two by fours and drywall when teething their adult teeth. I would hate to see what a 300 pounder could do.

Happy end of 2019 y'all. Maybe tomorrow is the start of a good one.

Karl, I have to ask...is Ludo named from one of the characters in Labyrinth (one of my all time favourite movies)? Ludo is a big, lovable character in the movie, and with your Ludo being a big, lovable pooch I wondered.

Karl, thanks for the update!

Craig F, did you happen to see the 1200-pound potato chip on the blog the other day? She's two of four I have. Gulp. Okay, so the others aren't quite as big as her!

As they say in my neck of the snowy woods, "Oh, for cute!" I can see how it would be impossible to stop at just one.

Linda, I thought that was a 1200 pound Twizzler, not a potato chip.

Also, we have a landline, if any of you remember what that is, and we don't even bother to answer it. That seems to be what voice mail is for nowadays, to miss the robocalls.

Such lovely floofs! I am not a dog person, but these two would make me question that life decision. Alas, I am between cats.

Happy New year, everyone! I am going to be having a wild evening, making multitudes of needle felted pandas. Don't ask me why. For some reason, having something to stab repeatedly seems to be very relaxing.

I would go with the flesh eating fishies. Wood chippers are so stinky! And then, you can hardly use the results for mulch.