Are you an Early Fan? 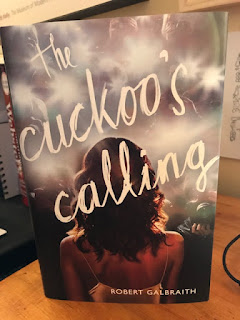 As most everyone now knows, Robert Galbraith is a pseudonym for JK Rowling.
That info was revealed by a total blabbermouth.

It's unfortunate in a lot of ways, but I regret it cause this is a really good book, and it would have been fun to have it as one of those Early Fan Of books: if you've read it, it's an instant connection to others who have read it. It's like having a favorite cafe that's utterly amazing, but not overrun with tourists cause "no one knows about it" except for the regulars.

Nick Petrie and Lou Berney used to be on this list.
Veronica Roth too.
Jess Walter.

Then a LOT of people discovered their amazingness.
Which I don't begrudge them a bit.
But it was fun to be among their first fans.

I was an early Galbraith fan! I'd read a couple of the Harry Potter books and liked them well enough, but never felt compelled to read them all. I also liked Rowling's A Casual Vacancy. And I've really liked her Strike series since the very beginning.

Do critique partners count? One of my CPs (you'll recall her from her incredible Query Shark winning query letter about raising the dead) has a book coming out in 2020. I'm a huge fan and I feel unreasonably proud that I found her so early in her journey. I have a feeling she's going to be a household name soon.

Stephen King. I read Carrie on the back of a motorcycle on the way to Florida when it was just published. Val McDermid. I scooped up The Mermaids Singing because it sounded intriguing. Preston/Child. I absolutely LOVED Relic and was so disappointed in the movie. There are a few others.

I have to admit however, I've never read a Harry Potter book *ducks from flying objects* and have yet to read The Cuckoo's Calling though I did buy it!

Is "myself" an acceptable answer?

Was a fan of Preston/Child, James Rollins, Greg Iles back when they first came out. But Matthew Reilly may be the better example. I had a friend in Australia who would send me his books from there (was the only way to get them back then, and certainly if I wanted new ones months before the US).

Judy Blume in the 70s. Her books were all the rage amongst pre-teens and teenage girls. That's how we learned about the changes in our bodies and boys.

I'm a tad confused. (What's new?) I would think if a writer gets big and lots of other folks discover them, you can still be an Early Fan. So, I don't get why Nick Petrie and Lou Berney fall off your list.

I've read a number of debuts this year, which has been a great time, so I have to create my list soon.

Forever Frederick Ramsay, may he rest in peace.

Hope y'all are having a good weekend, it was damn wet around here yesterday.

John, I guess it is because they are no longer a secret, they got popular

I’m usually late to the party, but since they’re local I got to be an early fan of Kate DiCamillo and Anne Ursu. Ursu was locally famous as Batgirl for a blog she wrote about the MN Twins, and it took a few novels for her fiction career to take off.

I should have been an early fan of William Kent Krueger but I wasn’t reading many mysteries at the time. I remember a nice profile of him that came out in our neighborhood freebie newspaper when he published his first novel. He always wrote in a local cafe — and still does, though it’s a different cafe now, since that neighborhood institution closed. The Broiler will always be open in our hearts.

Steve Forti so happy to see another Preston/Child fan here. I love Pendergast. Awesomely quirky. I think Still Life With Crows is still my favorite though. Pendergast is the only series I've bought in hardcover.

Have you read the authors individually?

nightsmusic - Yes, and it's actually the only way I can read them anymore. I was a fan pretty much right at the beginning (also very disappointed in the movie). But I always liked Pendergast as a supporting character. Once he became the main guy, I got tired of it pretty quickly. I haven't read their last - oh man, 17? now - anything past The Wheel of Darkness. I've read most of their solo ones, though they can fall into the same formula, too. I went through an adventure novel binge phase 15-20 years ago and maybe just saturated myself at the time. I did get them to autograph a few, though.

Also Tana French? I think I read Into the Woods before any of the others came out, though so far The Likeness is my favorite.

Also my friend Tori Curtis. I really liked first book, Eelgrass , and am anxiously awaiting either the sequels or just her next book in general. Same with my friend Premee Mohamed, whose short fiction is great, as is her novella The Apple-Tree Throne, and her first novel is forthcoming in 2020

Steve Forti I imagine you've seen it, but I'm considering the new Nora Kelly book. I haven't bought it yet, she sometimes irritated me to the point of wanting to skip her, but it's gotten fairly good reviews. A lot of complaints about Constance though. Her, I could do without.

I think Cemetery Dance was the last I read seriously. The rest, I've put down and picked up rather than reading straight through. I'm still buying them though.

Nightmusic: can I take cover with you? Harry Potter puts me to sleep.

J.D. Barker - The Fourth Monkey. The Fifth to Die. Plus, I heard him speak at ITW XIII. I feel like we're best buds now. (I wish!)

I was an early fan of Brigid Kemmerer. She is brilliant. Absolutely read her stuff. And while I am a devout Harry Potter fan, and a proud Gryffindor, I understand the series isn't for everyone. So no tars or feathers from me.

Also, I was at a conference yesterday, and couldn't enter the contest on time, but I had such a good time with my (now) disqualified entry that I couldn't help but share it. It's based on a writing exercise I completed at said conference:

I worried this might happen after the new kitten batted the toilet paper roll into dizziness. An undignified job, perhaps, but my body cannot support anything anymore. I’ll be tossed aside. Or worse, accidentally, unfairly, thrown into the toilet.

I snap, and half of me floats in stale yellow. My worst fears realized.

She pulls me from the bowl, fragile.
I’m ready to disappear, welcome oblivion.
And suddenly I’m back together, ready, holt. Respected after all.

I read Gillian Flynn's first book and LOVED it and bought her following books, including Gone Girl, in hardcover the day they came out. I remember reading Gone Girl and thinking, well, this is going to take off.

I wish the question was the other way around -- there are so many authors I'm just now discovering -- Tana French, Louise Penny, Robert Crais, to name a few. And I read the Harry Potter books (and loved them) only as a very mature adult. I "discovered" Robert Galbraith after reading The Casual Vacancy, and I'm champing at the bit for his/her promised next in that series.

Actually JK Rowling. My uncle sent us the first Harry Potter shortly after it came out. Back then, I was the same age as Harry. Ah, those were the days!

I second Jenn Griffin regarding J.D. Barker. I distinctly remember chatting with him at my 1st ThrillerFest cocktail party right after The Fourth Monkey sold for both print and film. He was still relatively unknown, but was so excited about his future, and rightfully so.

And I second Janet on Nick Petrie, who beat me out that same ThrillerFest year for the "Best First Novel" award. He's such a sweet, hilarious guy, I can't hold it against him (okay, maybe just a little - along with that slithery agent of his...:) )

I was an early fan (and still am) of Robert Bailey.

I think KM Rockwood is a super-under-appreciated talent.

I'm reading and will probably post a BIG endorsement and recommendation here for J. Michael Straczynski's "Becoming Superman: My journey from Poverty to Hollywood." Add him the list though he's written tons of things outside of the printed book.

Am I too late to be an early fan of Eowyn Ivey, Kristen Harmel, Kevin McCarthy or Donna Everhart?

I read every one of Adrian McKinty's Sean Duffy series before The Chain came out. I was floored when I learnt that the Duffy novels had earnt McKinty so little he had to work as an Uber driver. Also very happy that The Chain is doing so well.

If I listed Stan Lee from his early Fantastic Four, etc, days, can I sit in the rocking chair next to you?