I should have subscribed to Publishers Marketplace BEFORE querying

I was going to send you a pic of our Newf with a visiting Bernese/Pyrenees mix puppy in order to cause fluffiness-overload induced spontaneous combustion (your only known weakness) and rid the writing community of your menace forever, but Newf wouldn't cooperate.

She took one look at everyone paying attention to the puppy instead of her and went to sulk in the bathroom. I tried putting her on a leash to get her near him; at ten feet away she actually braced her feet and started telling me off. Loudly. She's still mad, four days later. 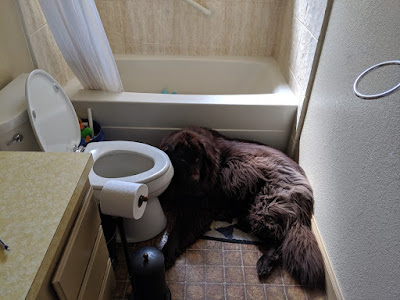 Next, queries. In hindsight I queried before my manuscript was ready, without nearly enough input from other writers into either the pages or the query, and without really having a good idea of which agents I should be querying.

I'd consulted several online lists of agents and gathered names as I read agent-related tweets and blog posts. Once I had a list of potential agents I researched each one online with a checklist. That meant I read each of the following, if available:

- Submission guidelines on their agency page
- Their page on MSWishlist.com
- Their social media posts on Twitter and Facebook
- Any interviews/podcasts they'd done that could be found with a simple Google search
- Some google searching on the list of books they'd already sold, if any.

I then queried any agent that was open and said they represented my genre, Adult Sci-Fi. It took me on average about 30 minutes to figure out if an agent was one I wanted to query. Much of the time I'd read things like "I rep all commercial genera fiction" on their agency page then read "but I hate Sci-Fi" in an interview they'd done three years ago. Actually querying 26 agents this way meant I did research on about 70. Those 26 queries/agent pitches at conferences got me one request for a partial, which was promptly (and deservedly) rejected, and one request for a full after I'd fixed the obvious mistakes. That's still out there, so fingers crossed...

There is one bright spot in the wreckage though. I've made very significant revisions to my MS and I got help to un-screw my query, so I can re-query the agents I sent a hot mess a year ago.

In order to make sure I didn't repeat mistakes during the salvage operation I figured this time I'd spring for a month of Publisher's Marketplace.

Twenty five dollars and an hour of research showed me just how much harder I'd made my life by querying without it. 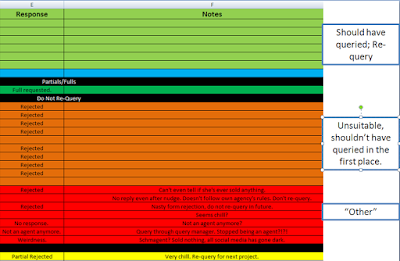 - Eight of the agents I'd queried were good prospects.

- Ten agents didn't rep anything even remotely close to what I'd written. Querying them was a waste of time guaranteed to result in confidence-battering rejection.

- In 'other' I found three via their social media presence the first time around. A PM search gave me cause to doubt that they were even legit agents, at least recently. I also left the comments in there in the hope that they'll help some other writer about to go on query brace for the really sub-optimal responses they're going to get.

In addition to a wealth of info I couldn't get even being pretty diligent without it, PM let me cut down my search time to something like ten minutes per agent. A simple check for previously sold books, and what they are, is an effective screen most of the time. Even if I was still busing tables for minimum wage I'd try and pick up a few extra hours and subscribe for a month; I'd save that much time on research and also a heck of a lot of sanity.