"Opinions may vary" is a common phrase in most form rejections.

While it's true, they do, sometimes the reason your query gets a pass is an opinion that's shared by a lot of folks. In other words, a whole lot closer to an objective assessment.


There's no standard that's 100% objective.
For every "you can't have a novel over 140,000 words" I'll show you six exceptions, and a lot of them published recently. But generally, excess word count is going to be a problem.

If I pass on your manuscript because there's no plot, that's something most agents would also notice. It's measurable. It's closer to objective than subjective.

If I pass on your manuscript because you're a man writing about rape, that's entirely subjective, so it's closer to 1.

BUT a lot of women in publishing share that opinion, so maybe now it's closer to a 4 than it would have been 20 years ago.

Some things that are more objective than subjective: word count, tension, pacing.

Things that are entirely subjective: plot (what it is, not lack thereof); sympathetic characters; topic.

As a querying writer, you want to hone your skills in sussing out which is which.

Objective is something you want to pay attention to.
Subjective, not so much.

Why not pay attention to subjective?
Because one agent does not a market make.

Things I wouldn't read if you duct taped me to a chair and force fed me kale are sometimes books that enjoy a robust presence on the New York Times bestseller list.

What I want to read and acquire is just that: what *I* want.

I'm not the only agent in the world, or New York City, or even in this room as we speak.

Query widely, but pay attention if someone says you've got problems that are high on the objective number line. 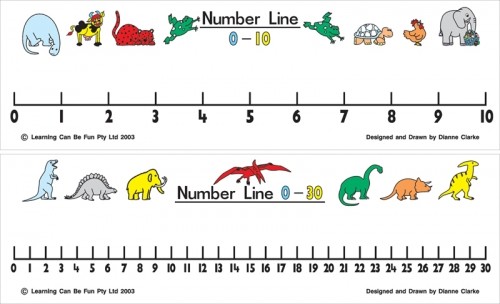 Love this post. Back to rewriting, keeping "tension" and "pacing" stapled to my forehead.

That darn word count hobgoblin. I had the word count beat until my wonderful betas pointed out I was short on detail and world-building in my fantasy. I fixed that to thrilled shrieks and applause. Only now, I have a bulky word-count. So off to another fretful revision. I wonder if Steve Forti can help economize my words? Seems like he could whittle down a paragraph description of a castle restored from the ruins of many ancient castles into a single word or two. Ugh!

I love the Number line graphics. I hope agents use the dinosaur one for assessing my query :)

Such an important distinction! Objectively, we know that rejection happens every day *cough* and sometimes it happens to US every day. Subjectively, we know (hope) that we aren't terrible, and after all, one "yes" is all that's necessary! (okay the yes for acceptance, and then the yes over and over again as readers find it....)


I find that "tension" and "pacing" are things that I notice now when reading or watching something....but when reviewing my own work, I often need significant distance to realize "oh, that's what's wrong with it!!"

Yes, I have a question (at the risk of it being stupid or maybe it has been asked before..):

I've recently been to a book launch (it was the first I have ever attended, to be honest, and I really liked this kind of event :) ).

It was for the new children's book of a new friend of mine (well, this is a little 'weird' to me - as a German I'd say acquaintance (hope I've spelled this correctly ;) ) but here in England people are 'friends' rather quickly :) ).

I bought his book and have read the first 6 chapters so far. No plot as far as I can tell (maybe I'm wrong!?). No goals. Almost nothing at stake.
I say 'almost' nothing at stake because maybe there is a little something, which is that the main character's secret shouldn't be uncovered. He says he doesn't want that to happen. However, when his friend asks him "What would be so bad if people found out?" he only says "I can only imagine bad things happening". So it doesn't sound that 'stake-y' to me.

And the main character (or anybody else) has no goals he wants to achieve, he 'just' seems to have adventure after adventure. There is some tension when he gets scared, though. And when he thinks there is danger.

So, because it's a children's book and obviously for very young people, I'd like to know if children's books don't need to be the kind of story that adult books need to be? (what's at stake? Goals. Change/progress of the character and things to make the ending be something different to how the 'story' started; development; a conclusion etc.)

Is it OK for children's books to be event after event?

Thanks a lot (because, who knows, maybe I'll write a children's book one day..).

I'm sorry, but the reasons I'm passing on your novel are more Triceratops than Woolly Mammoth. More Chicken than Cow. I hope you understand.

I love the idea of using a number line when considering storystuff. Very helpful. Thanks, Janet.

Katja: I think the various story elements are important in children's books, too. Grabbing and keeping young attention spans can be challenging. I'm currently working on increasing the stakes in my middle-grade novel. :)

"Elegantly written ... Fascinating premise ... I just wasn't swept up in the narrative."

"You're a great guy ... You've got a great personality ... It's just that I personally find you physically repulsive. But don't worry, cause opinions vary." :D

PS About kids' books ... Hard to tell without seeing the book, but the stakes don't have to be adult stakes.
In Beverly Cleary's books, the stakes are stuff like, "Does my teacher like me?"
In Judy Blume's books, it's, "Can I stop my parents' divorce?"
As a kid, I found Blume's books too tragic. Though I am sure there are tons of kids to whom they spoke.

This is a really useful post. Now I know what feedback I need to freak out about and what I can file under "ignore".

Too early in my personal query game to tell. The, so far, only, maybe, good point is that one rejection was sent out at 2200 on a Sunday night.

All I can state, so far, is that I need to keep chucking queries into the trench and hope of of them explodes.

Subjectively, I prefer my objectivity to everyone else's.

Ah I haven't even had coffee yet and that monster word count already pops up. A friend was complaining recently because he has a fantasy no one wants because it's just 65,000 words. I said, "I remember writing something that length once, but then an agent told me prologues aren't popular so I got rid of it."

I can't even fathom it, but word count woes swing both ways apparently.

In the end, it always comes down to one thing: story.

Steve Stubbs:
When agents post examples of truly awful queries/novels/rants they have been sent, sure, it's funny, but it's kind of becoming a pet peeve of mine as well. (Not that i get a vote or anything.) The implication seems to be that all writers have to do in order to get a nibble is avoid these hideous blunders, have a decently marketable premise, and query in a professional manner. That just isn't true. And being told "don't wrote about an Elvis seance" doesn't help me figure out why way more than 36 agents aren't in love with my work.

As always, Janet's blog is the most helpful by a length. Or maybe by an entire lap.

Julie Weathers and the 65,000-word prologue! That's a hilarious story for an audience of writers. And you tell it so well, holding the punch line -- actually, the punch word, prologue -- till the very end.

It's good to know that children's books need similar elements to a story like adults books. So I take this as something objective then :) ?!

I totally understand your point, Jennifer. The stakes you mention sound rather dramatic, maybe traumatic, and maybe shouldn't be in middle-grade books but rather Young Adult?! Preventing divorce sounds inappropriate for young children and unlike their goals.

I was more thinking of things, let's say (just making this up now!), that the main character's secret is that he knows how to make rain. And if he gets found out by people, he'd lose the ability and then there would be a drought and no water to grow grass and make a football pitch. And then the boys would lose their beloved hobby.
Or who knows, I'm just being silly now, but I think this would be real stakes for kids to read, rather than just "bad things would happen".
Just a little more concrete.

K OCD, I like the book you just outlined.

Stakes are high (drought) but still kid-scale (no football!). Not drought >>> famine >>> everybody dies, which is what adults would think of.

I think Judy Blume's books might actually be aimed at tweens and older. I might have been reading above my maturity class.

As some of the Reiders know, I'm currently working on a mystery.

And I've once again been reminded how much I loathe word counts as a standard. Even though it is still in early days yet, it's looking like this draft is in the Agatha Christie range rather than the modern day mystery range.

Now, I'm no Christie and I know that when I revise, there will be plenty of work for me to do. However, I have to say that both as a writer and a reader I've found myself feeling a bit jilted by the increasing dearth of short books(in all age categories).


I guess 'subjective viewpoints determine the objective standard' is almost 'the victor writes history' of publishing.

If you queried on or before 4/21/21 and haven't heard back, click the badge to get to QUERY LETTER DIAGNOSTICS before resending.