This blog is going to the dogs, Day 21 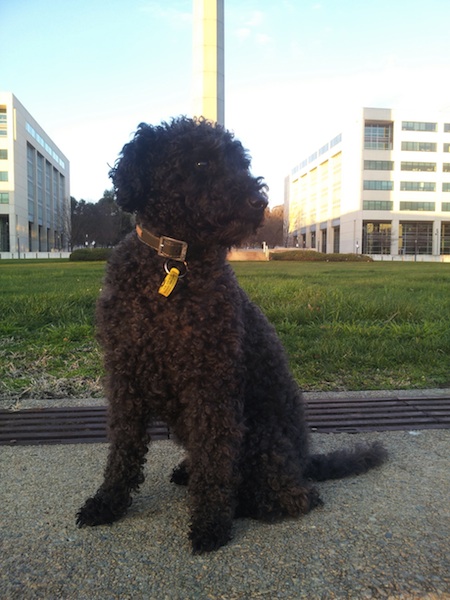 Took this photo especially this arvo (US translation: this afternoon). This is Biggles, my 10yr old schnoodle (schnauzer/poodle cross). And yes, named after the literary Biggles =) The photo is taken at Australia's Defence headquarters in front of the Australian-American Memorial, the tall column behind Biggles. Sadly you can't see the top of it - a sculpture of an American eagle.

Would have liked to send an action shot, but hard to get good photos with a black dog.

Tempted to send the one of him on an esky (US translation: Coleman cooler), but the "dog on the tuckerbox" reference would probably be lost on a mostly US audience. (Dog on the Tuckerbox reference here)

More than you probably wanted to know but you did say you were taking a break to read. Just helping with that *grin*.

Enjoy your sabbatical and thanks from the bottom of the Earth for being one of the good people on this planet. To put it the Aussie way: Fair dinkum you're a bonza sheila (US translation: fierce  shark who gnaws hapless writers!)
at 7:00 AM

Ha! AJ is that your beautiful pupper? Or is there another Canberran lurking here?

It's lucky the top of the sculpture is missing because it was MEANT to be an American eagle but the Italian company who we hired to make it went ahead and did an Italian eagle instead. We call it the 'chicken on a stick'.

And thank you for the translation. My Aussie isn't too good. Although I am suspicious of Janet's interpretation of that last line.

And Sam, crack me up!

Love everything about this... The handsome pup, the idioms from Down Under, and the translations. And now I want to go to Australia.

I love this pooch from down under. And Sam, so funny. Hope everyone is having a great weekend.

Very stately photo of Biggles. Although it looks like he is about to dash off! --cartoon style with the legs rotating and the kazoo sound effect.

On a side note, I think there may be an unreliable narrator last translation :)

Great shot. That golden afternoon light really captures Biggles' beautiful ringlets. Of course it might be early morning light... but I just can't imagine being out for a walk at that time. Especially during a Canberra winter. :)

Sam - that's hilarious about the chicken on a stick. I hope there's an Italian Eagle Rosticceria nearby.

Aw, Biggles, you're a cutie! Lookin' ready for action and adventure.

I agree with Melanie about all the idioms and translations - fun stuff. I also enjoyed the story about the Tuckerbox, but my dogs would've eaten the contents instead of guarding them.

I looked up Biggles and got the story of author James Bigglesworth. Bigglesworth! I'm just glad your Biggles is a schnoodle and not a hairless cat.

Beautiful dog. Schnoodle is one of my favorite breed names.

I looked up more photos of the memorial and it's beautiful! I find it humbling to reflect on World War II history.

What a lovely dog! Yes, pictures of black dogs can be difficult, but you've done very well with this one. You can see his eyes, his nose, and his whole expression of 'I'm sitting. Give me my treat so I can move again.'

Love the translations, too!

Biggles is a handsome dog. I had to enlarge the photo to find his eyes and nose. :-)

Australian is almost like another language, so I appreciated the translations!

Biggles is such a cutie!

I have a killer migraine today and thought "Holy crap - I must have a brain tumor - I can't understand a thing!" then I saw the translations.

Chicken on a stick made me laugh.

Off to the hammock with the chihuahua and a book about Jack the Ripper. It's a gorgeous day here in Florida, not quite as hot. It's only 87.

Great shot of your handsome dog. You've managed to capture his energy even though he's sitting still. Love the translations, and the story of the tuckerbox. Is Esky short for Eskimo? Here in Anchorage we have what claims to be the most northern Tastee Freeze. They say their business plan is selling ice cream to Eskimos.

Laughed at the chicken-on-a-stick. Cynthia, hope you feel better soon.

"But, mom, the kids are getting away."

I really do wonder how much longer Biggles stayed sat.

I am not blaming you because the Queen asked for photos of pets. Sop I didn't put in any info about the cat I threw into the hat but..

All those idioms and we missed out on all of the Metadata about the dog. You didn't say how big it is or even if it is a male or female.

There is some much intelligence and enthusiasm in those eyes you should let us know such things. It looks like a fun dog to let loose in the playground yo run all of the excess energy out of a hundred or so kids.

It is hard to get black dog action shots, I'm lucky Elka has her rust markings or I'd really be SOL. Biggles is very distinguished, though I wonder where his attention is. Is there food over there? People playing loudly? Another dog? (thoughts I in general have when looking at dog pictures.)

And he looks to be the size of a standard poodle, so I'm thinking probably about 20-23 inches? But I'm mostly going by the long legs. Because of the angle of the image, I could be wrong.

First, this is the Biggles to which OP (I'm seconding the notion that it's AJ) referred.

Second, I think Janet should have "Fair Dinkum You're a Bonza Sheila" framed on her wall. Compliments don't come much better. ;)

I hope everyone's having a lovely weekend (or had, in the case of our Antipodean friends).

Some of the puppy pictures make me wish I was a dyed in the fur cat person.
Biggles is adorable! and who doesn't love the name "Schnoodles"?

I love the idea of visiting Australia, as I am accumulating friends and acquaintances there, but the knowledge that they have so many beasts that can kill you and my enthusiasm wanes.

And besides, I am saving my pennies to go to China so I can have a toddler panda sit on my lap.

Perfect timing because I'm checking the blog for the first time in days and I'm waiting for my flight (conference finished yesterday - totally awesome time and I am feeling incredibly motivated and excited by my writing... it's like my mojo well had run dry and has been refilled).

He is named after James "Biggles" Bigglesworth - I love that my kids have been introduced to the classic series by our dog!

Biggles weighs about 8.5kg (~18.7lb). No idea how that compares to a standard poodle.

He sat still for about 3 secs (just enough time to get the photo) then was off to race around on the grass.

Laughing at Janet's most helpful translations (some I didn't realize would need translating). Esky isn't short for anything as far as I know, although we like to shorten everything so it might be?

Sam, I hadn't heard about the wrong eagle. Must tell the Hub.

What a great shot, AJ! You can tell he's poised on the brink of taking off after something. So many of these pics make me wish we could have sent in videos.

Thanks for the time-consuming diversion down the rabbit hole of history lessons. Really. Thanks a lot. Not like I had anything else to do today.

Congrats on feeling motivated and excited about writing again. That's great to hear.

You've got a beautiful boy there, AJ! Also loved learning about the dog on the tuckerbox--for some reason, it reminded me of the story of Hachi and its similar message of loyalty.

I can't get enough of these pictures.

BJ, my darling, I am sorry i missed the gender. I was also thinking he was 20-25 pounds. That is a great sized dog for most people.

It was a rough second part of last week. I went to donate a few things to a Coonassed friend (a back country Louisianan). His trailer was full so I found another and it got filled. Louisiana has a bunch of refugees spread across the south and they support their homeland.

A few hours later we were heading north on I-75. It was a wild trip. It was worse returning because Der Trumpf screwed up traffic in a place that really could not stand it to get worse.

Our return took us up into Arkansas and across Bama. It was harder because I scratched the shit out of a lens of my clear glasses rescuing some dogs. I would have liked a puppy but they weren't ready yet.

Craig: Wow. You've had a busy few days, doing good for people (and dogs) that needed it. You're a good friend and a nice guy. Thank you for doing so much.

My sister's standard poodle is about 35-40+kg I think, and stands to my ribcage, so massive compared to AJ's little guy! My two dogs are both around the 20kg mark and they're only medium sized (about my knee height).

I don't think esky is short for anything - pretty sure it was just a brand of cooler box that took off and became the generic name for them? We do have the Coleman brand that Janet referenced too.

I also feel compelled to note, in defence of our perfectly understandable (mostly) dialect, that I have never heard anyone actually use the terms 'fair dinkum' or 'sheila' except in parody. ;)

Oh and don't worry about the wildlife. It's mostly exaggerated. I mean, it's not like - oh wait, just remembered that my son got swooped by his first magpie yesterday, so welcome to Spring, I guess? Yep, sunny Australia, where even the birds literally try to murder you for a quarter of the year.

AJ the RWA conference looked great - thanks for the tweet updates!

Esky is short for Eskimo, and was a brand name that eventually got commandeered for all portable coolers, whether manufactured by Coleman or not.

There has to be a word for the application of a brand name to a generic item. i.e.: Coke, Xerox, Jello, etc.

Term of the day: Proprietary Eponym. I learn so much here. And who knew Heroin and Brassiere were once brand names?

Glad the tweets were interesting, Sam.

To totally ruin your defense of the Aussie language, I actually use all those aussie-isms in my everyday speech. Maybe because I'm a Queenslander by birth? The one I use the least is bonza.

Magpie swooping season... time to fix the ziplocks to the kids' bike helmets!