It's time for the list of things that just knocked my sox off this year!

First up is THE MOST DANGEROUS BOOK: The Battle for James Joyce Ulysses by Kevin Birmingham. 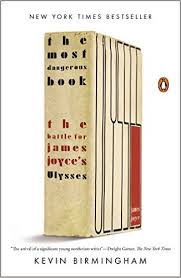 Frankly, this guy could probably write about paint drying and I'd be fascinated. He's got a real gift for exposition and it serves him well in this complex story of author, publisher, smut laws, and anarchists.

And if you're neither of those, you'll still want to read it cause it's just a great story, well told.

Here's one of my favorite paragraphs (there were many)


[Despite all of this] she [Sylvia Beach] decided that Shakespeare & Co. a company of one, after all, of a thirty-four-year-old American expatriate who was until recently sleeping on a cot in the back room of a diminutive bookshop on a street nobody could find--would issue the single most difficult book anyone had published in decades. It would be monstrously large, prohibitively expensive and impossible to proof read. It was a book without a home, an Irish novel written in Trieste, Zurich, and Paris, to be published in France in riddling English by a bookseller from New Jersey.

The highest praise I can think of for this book is that it made me eager to read Ulysses.
at 7:00 AM

Back in 2005 I wrote a piece of flash fiction called By The Book in which Officer Rooney speaks to the local librarian when someone filed a complaint that she had rapped a kid's knuckles. 12-y-o Billy tried to check out "Ulysses," which Miss Emily considered "pure hedonism," so she rapped his knuckles. Officer Rooney points out: “You know, Miss Emily, trying to plow through Ulysses is not the worst thing that a kid can do these days.”

I haven't read "Ulysses" but I have read "A Portrait of the Artist As a Young Man" and a couple of his short stories.

Sounds like an interesting book. I haven't ready ULYSSES either, which isn't a surprise (my OTR--Ought To Read--list is long). I'm not sure it would be my cup of tea, but the story around it might be.

I read most of Amazon's sample, jumped on Birmingham's site, read his bio. If ever there was someone ready to 'Michener' that in which we would normally show no interest,it's Birmingham.
Man, that guy can get in your head and leave you wanting more.
And to think it's his first book, Go figure.

If you're into this, THE SWERVE by Stephen Greenblatt is another great book. It tells how Lucretius' "On the Nature of Things" was rediscovered in a monastery and distributed under the nose of the medieval church. It's his argument that it helped to shape thought and bring us out of the dark ages.

I enjoyed that so much, I'll have to check out this one.

The best of the bad book list. I want to read it.

Shakespeare and Co. is still there but probably not the space he describes. It feels like walking into a Harry Potter movie.

On Saturday afternoons There is and open writing critique group( prose and poetry). If you can elbow your way through the floor to ceiling paperbacks, the tourists selfie-ing,the browsers, and inch up the paperback-lined stairs, for five euro you can participate.

I was skeptical but the feedback from the others writers is good; open minded and scathing.

It was in front of the Shakespeare and Co. where I said all those F-words for the Avery Cates F-Bomb project.

Angie, it's not the same bookstore as the one today. Eons ago I had tea with George Whitman and he asked me if I needed a place to stay. I must've looked like I did, but I didn't. Lol! Young travelers, artists, writers, etc., could work in the store in exchange for a place to stay.

So many changes have taken place there throughout the decades, yet so many things have remained the same. I must say, it's taken awhile to get used to not seeing him there when I walk in.

Agree to disagree. But it gave me insight into what you want as a literary agent. Apparently, we wouldn't be a good match.

Because, honestly, I wanted to edit the hell out of your cited example because of a bunch of redundancies.

Still, who am I to argue with success?