Salvation of a Saint 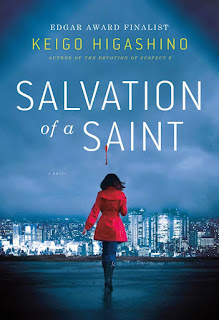 If you have not yet discovered Keigo Higashino, you're in for a delightful surprise. I am a rabid fan. You will be too.


With this new book, Higashino has taken the art and craft of mystery writing to a new level of excellence.

JR:  How did you find the author Keigo Higashino?

KK: Well, as frequently happens, it was an enterprising agent who found me. In this case, it was Akiko Kurita of the Japan Foreign Rights Centre, who is now retired.

Earlier, we’d discussed a book of Edogawa Rampo – a towering figure in Japanese mystery fiction – so when she took on the foreign rights for The Devotion of Suspect X, she had her U.S. sub-agent approach me with that book. And that was my introduction to Keigo Higashino.


JR:  Both Devotion of Suspect X and Salvation of a Saint have two "detectives" of sorts. One is a policeman, one is a physicist. This idea of dueling detectives is a variation on the sidekick motif. Is it common in Japanese detective novels? I can't think of other examples of it...

KK: I don’t know this trope shows up a lot in Japanese mystery fiction, but it’s not wholly unknown in the West. The bumbling police detective who solves a problem incorrectly only to be put straight by the talented amateur – a standard in pre-WWII English mystery fiction – is but one twist away from what Highashino is doing with these two books. I think Higashino rings an interesting change on the traditional mystery novel but he’s not really inventing something new.


JR: . Neither book involves the stylized courtesy American readers are familiar with in Japanese culture. Is this a choice in the translation, or is it also absent in the Japanese editions?

KK: It’s a bit of both. The stylized courtesy that American readers see in translations is part of the basic furniture of interaction in Japanese – it’s unremarkable and unnoticed by the Japanese reader but feels stiff and formal in English.

The idea of this kind of translation is make it as invisible as possible to the reader – and to the majority of English readers to have Detective Galileo referred to as ‘Yukawa-san’ would be intrusive in a way that it isn’t in to native Japanese speakers.


JR:  What drew you to these novels?

KK: Originally, what drew me to take a closer look is just how popular Higashino is in Japan and throughout Asia, how many movies and TV shows are made of his work, how – unlike the vast majority of authors – he’s so popular that he’s known in Japan to general populace in a way that almost no writers other than Stephen King or J. K. Rowling are in the west.

From there to these specific books, it was the sheer complexity and cleverness of the plots. And how, while there is an essential quality to the stories, sometimes it’s the characters and how they react, sometimes it’s a cultural plot point, that make them unmistakably Japanese, they are so essentially human that they also transcend culture. Which is to say, there’s a universality about them that makes me think that the average American reader can understand and enjoy them, if not in precisely the same way that the original readers in Japanese might have.

JR: You and I have had several conversations about the interesting fan mail your authors get. What kind of responses are you hearing about these books?

KK: Alas, not any real fan mail on this.

JR: (Consider this blog post fan mail then! I am crazy about this book!)

KK: I’ve not, nor have we interacted directly. Which isn’t uncommon at all when an editor is publishing an author in translation. A lot of my U.S. authors have never interacted with their non-English speaking European publishers, there’s no reason to expect Higashino to have the time or interest to reach out to his U.S. publisher. That man’s got deadlines to meet and books to write!

When there are points to discuss, I raise them with the U.S. agent for the book, she takes those concerns to the agent in Japan, she takes it to the publisher (who administers the foreign rights for the author) and the publisher, presumably, discusses those matters that the author has expressed interest in hearing about.


JR: How did you find the translator?

KK: A lot of reading. I had a sense of what sort of tone I wanted in the translation, so I went out and bought a lot of current translated works – from literary novels to manga – and picked a few that seemed to suit, have a sense of commercial fiction and story-telling that came through in their translations.

I approached several and from the pool that had the time and the interest, I then picked three (or four? I can’t recall) and contracted them to translate the first chapter of the book.

A group of us – the U.S. agent, my editor in chief, my imprint publisher, a colleague (or two) and I all read, picked our favorite version and for everyone, that was Alex’s translation. And that’s how I tracked down and decided upon Alexander O. Smith.

JR: What's the biggest challenge in publishing novels in translation?

KK: Convincing readers that there really is something for them in a novel with a foreign setting by an author with a name they can’t easily pronounce. It’s a very tough hurdle and the few successes only attest to how hard it actually is to get readers to read outside of what they think is their comfort zone.

JR: (I will lend you my cattle prod to encourage people to read this!)


JR: This is a classic puzzle book. Did you figure it out before the end? (I didn't!)

KK: Nope, I didn’t. In fact, what I told everyone was quite true – when that last twist came along, I was so shocked, so surprised, that I gasped out loud for the first time since I was twelve years old and reading And Then There Were None by Agatha Christie.

JR:  Please tell me there are more books in the works! I'm not sure I can stand waiting though.

KK: There are, in fact, two. One is the next (and for the moment, the only other) Detective Galileo novel, A Midsummer’s Equation. The contracts are off being signed in Japan now and I hope to get the translator started later this fall.

The other is Malice – a novel about two children’s book writers, colleagues and rivals, one of which has killed the other. It will be the first book in Higashino’s series featuring Kyochiro Kaga, a Tokyo police detective, to appear in English. The Japanese publisher – a different on than for the Detective Galileo books – is currently reviewing the contracts, so that one is moving ahead as well.


DEVOTION OF SUSPECT X and SALVATION OF A SAINT should be required reading for every crime novel lover.  They are both amazing.
at 7:00 AM

Going on my TBR. Thanks for the recommendation, Janet! :)

This summer I got the Chinese translation of my book Restoring Harmony in the mail. This was so interesting to read about how translations come about. Thanks for the interview. I'll check out the book!

It's always fascinating to learn about huge stars in another country (in any domain) who are unknown in your own. It makes you realize how vast the world really is.

Janet, this was a great Q&A. I am now going to get these books and read them! Thanks for the recommendation and for taking the time to do the Q&A with Keith. Thanks to him for doing it also!