Do you know what a momentous day it is?

At first, only those on the cutting edge, the truly over the edge, knew the exciting news!

Then guys who can see into the future started talking

Songs were written and auditions held in waterfront Parisian bars. 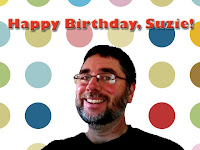 Advance Reader Copies were a harbinger of exciting things to come!

then newspapers were filled with the story!

Men in fast cars carried the news hither and yon! 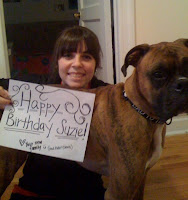 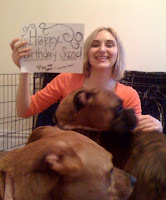 Hither being Brooklyn, where dogs howled. Anna and Rachel...well, yes, they howled too. 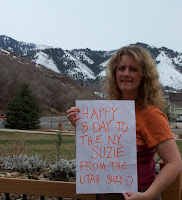 Yon being Utah,
where the news was yodelled from mountaintops!

The news didn't pause to rest, no matter how enticing the hammock!

The men in fast cars found Seattle Municipal Judge Adam Eisenberg willing to forgive an infraction or two for a good cause! 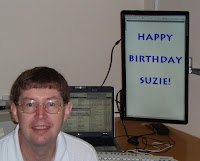 The news spread halfway across the world by noon;
Gary Corby reports Sidney is awash
in "Happy Birthday Suzie" banners! 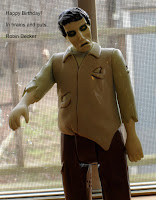 By now, even the zombies were caught up in the fun!

Meanwhile, back at FinePrint,
it's a different story: 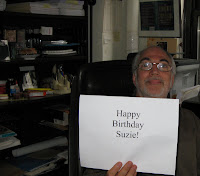 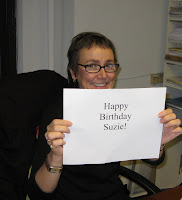 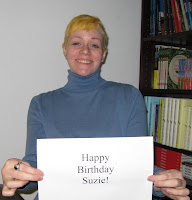 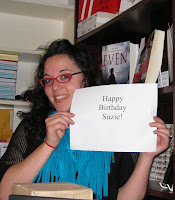 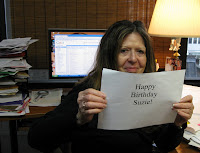 Nancy and Joanna, being sweet, reminded everyone that
birthdays mean cupcakes! 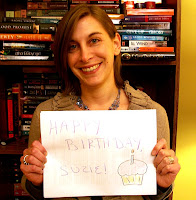 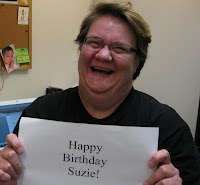 That made everyone in the office very very happy! 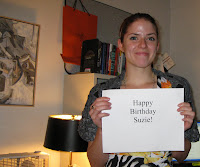 Mer-Bear who lurks in Janet's lair
"I'm not afraid of the Shark!
Bring on the celebration!" 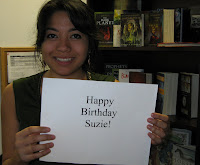 Judith "heck, the door can answer itself.
I'm in! Bring on the frosting!"

and as usual, Janet Reid was nowhere to be found.

Your friends, your colleagues, your clients
and your doggies
all wish you a
very
VERY
Happy Birthday!
at 10:52 PM

Email ThisBlogThis!Share to TwitterShare to FacebookShare to Pinterest
Labels: colleagues

Hmm... now beginning to wonder if Janet isn't an oldschool vampire and not able to be photographed.

Happy Birthday, Suzie! I couldn't find my camera for a picture (!), but I want to say, Thanks for your cupcake-and other-contributions to writers and humanity in general. You rock!

This. Is. Amazing. I'm a little misty.

I'm glad you're over there to keep everyone in line!

I have never seen someone go quite that far for birthday wishes. Suzie, I've never met you, but I want to join in. May you have a happy and blessed birthday.

Janet, the Shark shows its welcome soft side. Awesome!!

I don't know you either, Suzie, but you must be an amazing and fun person to have all these people so eager and excited to applaud your birthday. Have a blast on your day, Suzie, especially with the musician in the Parisian cafe!

Such a sweet way to great someone a happy birthday. Happy Birthday to Suzie as well.

What FUN! Happy birthday, Suzie. Just had to join in.

Happy bday, Suzie! Can I take my racing suit off now?

After seeing this, I've decided I need new friends. I've never gotten a birthday blog post like that.

Congrats to Suzie. It's not every day a person's birthday makes headlines (literally, see above) around the world.

This is one of the best birthday wishes I've seen in a long time. Suzie is one lucky lady. :)

So, Suzie, just so you know, you crashed my computer with the hotness that was the pic of you and Chippendale Luc, which is why you don't have OS edits back yet. But I love you anyway! =) Happy B-Day!!!!!

THIS IS SO AMAZING :)

I'd like to say HAPPY BIRTHDAY, but I think I've been blinded by the beauty that is Gary Corby's vertical computer monitor...

That is just an awesome post. You are a good friend, and I hope Suzie has the best birthday ever.

I was working on a photoshop delight, but I couldn't finish it in time.


(and I never use exclamation marks; I opened a new package just for the occasion)

I don't really get a feel for Suzie from these birthday wishes. It seems rather shallow, and I didn't want to read on.

Hooray for Suzie's birthday. Janet, you pulled together some serious cameos! Also, I finally got to see what Suzie's dogs look like - I have to say I was expecting them to be smaller and fluffier. Meh. Hope the cupcakes were delicious!

A belated Happy Happy Boithday to Suzie! It's wonderful to see you have colleagues who love you so much.

What a fun post! Had me laughing all the way through breakfast.