A perfect gift for the graduate 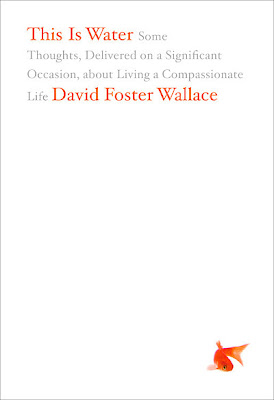 THIS IS WATER: Some Thoughts, Delivered on a Significant Occasion, about Living a Compassionate Life by David Foster Wallace.

I bought this on a whim to fill out an Amazon order past $25 for free shipping.

I have a feeling that long after that other book is read and shelved, I'll be reading and re-reading this very small, very elegant book.

Here's Tom Bissell's essay in the New York Times on the topic.
at 10:15 PM

If you have time tomorrow, perhaps you can drop by http://lastroast.blogspot.com

Chris Eldin is closing shop on Bookroast and they're having a farewell celebration, courtesy of the various roast masters.

She'd love it if you dropped by!

I already bought the grad a gc to Powells, but maybe she'll buy this herself! Thanks for the tip. I always check into books you recommend.

thank you for this entry...

Ah yes... living in the Existential Abyss. Interesting place. Some fall so deep as to be swallowed whole. Others pass unscathed. Don't ask why - that leads to endless rumination!

There is a way out... find out what YOU love about life and do it!(assuming, of course, you know who this "YOU" is - no easy task). Drink as much from your bitter cup as the sweet. Favor neither. Watch carefully, you'll learn!

Love his stuff...and I'm realizing I'm also a sucker for a goldfish cover!

I read the address a year or two ago online, and it was wonderful. Wallace was an important writer for me. The experience of reading Infinite Jest when I was 18 is something I shall never forget, an experience of doors and windows opening all around me, offering views I had never before seen and would never after forget.

I remember thinking: "You can do this in a story? Why didn't anyone tell me?"

His death was so sad... but I shall look forward to his last, posthumous (and unfinished) novel when it comes out.

Obliquely re DFW at Kenyon. 3 years ago one of the museums in Berlin had a Goya exhibition. The admission system was: you came and lined up. At one point it took two hours to get to the ticket booth and then go in. In London, on the other hand, the Tate has high-profile exhibitions, and their system is, you buy a ticket for a particular time slot. So you normally buy a ticket and go away and come back. (You can also, um, y'know, buy them online?) So the Tate never gets these lines stretching out for a mile down the street. (It's slightly weird, because one thinks of the Germans as being so efficient.)

People of my parents' generation can remember a time before Interstates, when you really had to drive along something like Route 66, stopping, from time to time, at traffic lights. We know better.

My dentist (known to those in the know as Best Dentist in the World, take a bow, Roz Tritton) never has any lines at all, because she, um, sets up appointments.

DFW talked in his speech about how being an adult means learning that you have to sacrifice, sacrifice, sacrifice. Key illustrative examples in the speech were a visit to a crowded supermarket and a traffic jam - you may be maddened by all these people getting in the way, but why not dream up a far-fetched excuse such as that the fat one has nursed her mother through cancer?

My feeling is, something's wrong here. DFW was a writer of genius. If he somehow thought that being a grown-up amounted to finding a way to deal with endless boredom, if he thought being a grown-up amounted to sacrifice, sacrifice, sacrifice, the problem is not that he was not able to sacrifice as much as required; the problem is that he was embedded in a system where someone who talks about queueing theory looks like a heartless Spok. We should have fixed the system for him. We should celebrate the 10 Items or Less Line! We should celebrate RetailRelay.com (of Charlottesville VA), who let you shop online at a dozen stores and pick it all up at a designated pick-up. And as members of the publishing community, we should think: Can't WE have the Tate system? Can't WE have an Interstate? Can't WE have 10 items or less? Because DFW got one thing right, the point when people tend to hate each other is when they get in each other's way. Which is not necessarily a consequence of selfishness, or solipsism; could just be that we need a little social engineering.

O, Great Shark. If you use Amazon as much as I suspect you do, you should get Amazon Prime. It'll save you a bundle similar to the bundle it saved me. And I swear I do not work for Amazon, though they should pay me for being the sublimely excellent customer I have been from Day 1.

I read DFW's Kenyon graduation speech to my students once. It was good for them to hear someone talk about putting aside consumerism (and thinking of degrees like consumers) for a while and think about what Wallace recommended: how can I get away from being the center of my universe?

*squeak!* I read that years ago and it was so super fantastic. I'm thrilled they made a book out of it-I'l be getting that one asap.

Excellent article in the Times.

Will put the book in my Amazon shopping basket.

If you queried on or before 4/2/21 and haven't heard back, click the badge to get to QUERY LETTER DIAGNOSTICS before resending.