What We Mean When We Say We Will Never Forget 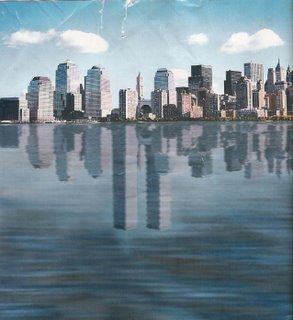 Janet, I'd like to ask kind of a personal question if you don't mind. 9-11 happened on a Tuesday. I remember that well because I was trying to hit deadline at the magazine. My middle son called and asked me if I was watching the television. I told him I was working so he said I needed to turn the news on. Something terrible was happening. Just moments later the second plane hit.

I remember how horrified I was and I was nowhere near there. I also remember the pride at the tireless work people did to try and help others.

This is still a very emotional event for me, as I'm sure it is everyone. As a New Yorker, does this cloud your daily life. I know people move on, but it just seems having that gaping hole in the heart or your city would leave a constant pain.

Of course, I would be interested in what anyone from the area feels. And no, I'm not trying to stir up anything political; there are other and better places to debate politics. I just want to know how people feel about their city.

Thanks for the reminder Janet. Unfortunately, I think America is starting to forget that day. It should never be allowed to happen.

You're not forgotten here.

I was in college in Florida when the towers hit. I remember leaving class and my then-boyfriend (now DH) in his army uniform running towards me to tell me they were bombing New York (because we had no other information at the time).

He's still in the army. He's been to Iraq. And this morning the soldiers here started their day at 3:30am so they could do a remembrance ceremony.

American soldiers, and their families, will never forget.

That's a hell of a poignant image. Beautiful.

I don't think anyone in the city or in the surrounding area will ever forget that day...or the days that followed.

"I think America is starting to forget that day. It should never be allowed to happen."

I agree and it's very unfortunate.

"He's still in the army. He's been to Iraq. And this morning the soldiers here started their day at 3:30am so they could do a remembrance ceremony."

My son is in the Guard. His unit was called up to help in New York. They've been to Iraq once, but he didn't go because he was still in high school. They leave again shortly. New York seemed dear to the recruiter who discussed the event with us.

That image is perfectly how I see the city. I went back this summer for the first time since the towers fell, and it felt like there was such a hole in the skyline. I kept looking for them, even though I knew they weren't there.

I always feel melancholy on this day.

Interesting image. We never forget, but can we forgive? Can we be friends again, Middle East?

The world will never know...

Thank you for posting this. As I was checking the blogs this morning I was getting upset at how there was nothing being said.

What a poignant image.

I'm on the other side of the country (San Diego) and I still wake up on this day every year, somber, and remembering. Yet, each year, I do become more hopeful that we can move forward - as a country and as a member of the world. Not in order to forget our past, but to better our future.

I have photos of me and my kids on top of the tower and then again standing in front of the chain link fences - it's so sad.

My birthday is on 9/11 (funny how everyone remembers it now). I don't know if it is because of the date but I always have to watch a program/docmentary about that terrible day. One thing it makes me think about is how lucky I am to see another birthday. It also makes me thankful for what I have.

Another thing that I have noticed is the programs/documentaries shown are getting less and less each year.