Is this the new norm?

I was scrolling through a Facebook group that I belong to and ran across a post from a fellow author, asking for advice. She had received this response from a publisher and wanted to know if anyone had any experience with them (I know the pic is small, I'm hoping you can still read it): 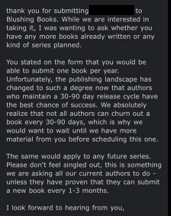 Needless to say, I just about fell off my chair. Is this honestly the direction that publishing is going? A book a month? I mean, I realize that this is a single publisher, but with the way the algorithms and such work over at Amazon... this seems to be the direction that we're headed in. Honestly, though, this just screams quantity over quality to me. I did do a little research and the publisher is not a vanity press. They are a romance and erotica publisher that pays an advance and 50% royalties once the advance is earned out. They also pay for editing and cover art. The majority of the marketing seems to be up to the author (but that doesn't seem to be unusual in today's publishing landscape). Is the self-publishing model of rapid release going to eventually squirm its way over to traditional publishing? Will writers just become word monkeys, chained to their desks, churning out pages as fast as they can?


No. And no.
Which is not to say this model doesn't work, because it does.

Back in the day and that was The Day, I worked as a telephone operator on the night shift. Calls were not frequent but we were staffed up just in case. Which meant we were sitting around between calls for sometimes five minutes or more.

Fortunately, we were allowed to read.

The first time I worked nights, I hadn't known to bring a book.
Well, no problem. The lovely ladies I was joining had books to spare.
And ALL of them were Harlequin romances. Old style, mass market paperbacks.
The ladies bought these books by the multiple dozens.
And lest you think they just gobbled them down, oh no.
They regaled me with plot lines, characters and settings on the dozen or so books they had with them that night.

I never ever disrespected the romance genre after that.
I don't read much of it, but those books were treasured by those ladies (and a lot of other readers too) and who am I to judge their taste. Let's all remember I loved Perry Mason books at one time.
Which is to say, this model that involves producing a lot of books on a quick time line isn't new. It's in fact, rather old school in this category.

It didn't overtake the publishing biz then, and it won't now.
This kind of book appeals to a certain type of reader.
And that's exactly how publishing should work.

As a writer, if you can write at this speed, have at it.
But if you can't, don't want to, don't worry. There's a place for us slowpoke writers and readers too.
at 7:00 AM

That particular publisher is the Erotica of the Harlequin model however, Harlequin books are much better written. It doesn't surprise me that they want a book a year. When they first started, it was, I believe, three books a year. Very, very few authors can turn out a quality story in that amount of time. The better your story, the longer it might take you, but you have to write the story that speaks to you, not the one a publisher insists on. If that takes you a year, so be it. If your publisher loves your story, they'll wait at least a reasonable amount of time.

My understanding with a lot of the digital romance publishers is when they say "books," they're not necessarily talking about full-length novels. They'll put out short stories and novelettes as individual titles with covers and everything. Expecting you to do 10K words every 90 days is still a decent clip, but not nearly the ludicrous speed of 100K words every 90 days.

Kinda like how one agent I follow mentioned she has a client bringing out 12 books this year--they're all picture books and chapter books. Still industrious and an achievement, just not a superhuman one.

(I don't even think they're wrong about how the most successful authors publish *something* every 30-90 days--that's just only true for this very specific audience. In something like SFF, consistently releasing 1 novel per year is considered pretty impressive.)

As has been stated, this is a model for a specific genre and a specific type of book, generally 55K-60K in length. Their readers want a book they can finish in a day or a weekend, and they love series. I think this is in part because some of the complexity and layers that you lose in the shorter word count of the individual books can be woven through the series (friends, family, business ventures, over-reaching suspense plots, etc.). BUT...if you have these ongoing storylines, it becomes more imperative to get the next book into the reader's hands ASAP.

It isn't just erotica. These can be anything from military action romances to small-town feel good, to shapeshifters and vampires to billionaires to historical western to...almost any genre you can imagine, as long as the romance is the central plotline and it has a happily ever after. I have a lot of friends who do write at a six to eight book a year pace, and I am in awe. My creative process just doesn't work that fast, and I can't muster the discipline it takes to put that many words down every day while juggling overlapping releases, edits, and all the rest.

I give this publisher marks for saying right up front that this is the kind of writer they're looking for. It is a very special breed and if you're not one of them, no matter how brilliant your books are it will end in frustration on both sides.

Boilerplates. You could set up five of them and rotate through them. Use a macro to plug in names and places, you could pump them out in a couple of hours.

I guess when faced with conditions like that you have to choose whether you want that model or would rather look elsewhere. Tough choice. But I am very relieved to hear that isn't the direction publishing is heading!

I read a couple of articles about this kind of writing/publishing schedule recently (out of pure nosiness, doing anything like this would kill me; I'd also be arrested for child neglect, possibly posthumously):


One of the articles is a little old but had more details on the extreme lengths of planning and special desks required.

I read this and felt vaguely ill. I guess you have to be pretty special to a) want to do it like that and b) cope with it!

(P.S. Maybe someone who knows how can linkify these!)

Since I missed congratulating you, NLiu; here you go

Well, I'm a self-published author. And I like to wear a good quality dress rather than one mew cheap one after the other.
And I want my readers to wear best quality, too. :D

Published my first book last July. Who knows when I'll release my second...

P.S. I did enjoy all those details from back in The Day. Would have LOVED even more of them.
If we could have some more of that kind one day... those Ladies, you... it does sound interesting. I bet you still went to work tossing a coin/token for the subway. Aw, I love nostalgia...

The timing of this post is interesting, as there's been a lot of chatter on YA Twitter the past couple of days about publishing schedules, with many authors saying they feel pressured to produce a book every year. Several said they were told by agents/editors that faster turnover was essential to building and maintaining their "brand," because readers would lose interest if they couldn't get a new book from their favorite author each year. These were all traditionally published authors, including some very well-known ones - and they were careful to stress that this is a new expectation in YA, contrasted with the previous publishing norm of having books come out every other year, or every two years. (They also stressed that this was a very bad development for authors who hold day jobs, i.e. almost all of them.)

So while a book a year certainly isn't the same as the 30-90 day production period OP worries about - or even up to standards of Romance - it seems like there are certain genres that are moving in this direction, for better or for worse.