From blog reader Writer of Wrongs:

My state's wildlife office does spring checks of radio-tracked (collared) bears and their young. We're too far south for a true hibernation; instead, the bears are in a state of torpor. A veterinarian and field biologist sedate the sow and monitor her, while another field biologist and the state's "bear guy" examine the cub(s). They allow small groups to accompany them on these trips, and I GOT TO GO!

After we had turns petting this little dude, he was returned to his mother's den just a few yards away, and she was given a shot to reverse the sedative. (More importantly, the bear guys weighed and measured him for records of the state's native bear population.)

It was a delightful experience, and I thought you and the Reef might enjoy these pictures. He was warm and cuddly, and he yawned and sneezed and was just generally adorable. 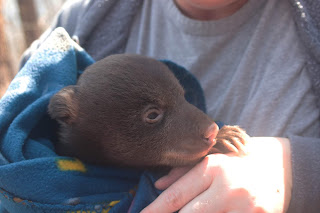 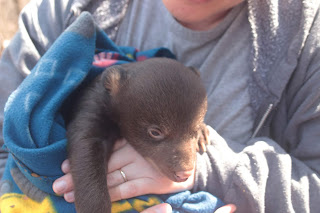 Awww... He's cute from this side of the screen.

In college I worked for a wildlife and biology journal. My boss frequently went on these bear-tagging trips for her research and she had some crazy stories.

Oh, wow! I used to work with these guys in college. (Maybe another group though).

It was helpful for the bears and the humans bc it took 'problem' females (ones that were getting into garbage cans, etc. and had a high likelihood of eventually getting put down) and kept them in captivity a few months for studies.

Out of hundreds of bears, only one adult ever became a 'problem' bear again. None of the cubs ever did. And, I loved holding these little wild things too.

That face looks very, very kissable... And I love stories about humans helping wildlife (any life, really). WoW, May I ask where you are, your state?

WOW, WoW! What a great experience!

Melanie — I’m in Arkansas. It was so much fun, and he was so snuggly!

Awwwww... so cute, Wow! Thanks for sharing.

What an adorable little guy with such lethal claws...but I'd have been out of my mind happy to get a chance to pet him too!

Micki, how cool for you. Regretfully the Game and Fish people I know are all on the fish side of things.

So sweet. What an awesome experience.
I've never seen a bear without reinforced glass or a deep ditch between us. If I did, I'm pretty sure I'd have my usual attack of wild animal-sighting Tourette's. It's happened every single time I've seen a snake or a goanna in the wild. My brain flips inside it's casing and there I go; firing off expletive after expletive as I slowly back away, shaking from my ear lobes down to my littlest toes.

Adorable! Thanks for sharing.

I showed this to my brother whose nickname is 'bear'. Reading the title, he said, "There's a bear with her?" to which I, having read the full post, replied "No. There is not a bear with the Shark."
He also read "vegetarian" instead of "veterinarian". Hope I'm not the only one to get a laugh out of that.

That cub is adorable! Glad you were careful of Momma. I'd probably be scared even if Momma was sedated AND five miles away.

With my luck, that cub would be the Inigo Montoya of bears and spend the rest of its life tracking me:

Wow, cool! My dad does a lot of wildlife stuff but we don't have anything that big to cuddle (UK). Baby bear's cute pink nose is just the best!

Writer of Wrongs: I LOVE this. What a cool experience. Thank you for sharing!

ps - growing up, I took many canoeing/camping trips to Arkansas with my family. It's a beautiful state.

This reminds me of one of the best news stories I've read recently. A family did not realize their 250 lb dog who ate 2 buckets of food per day was actually a bear until he started walking on his hind legs. Love is blind. P.S. the bear has been safely re-homed in a nature preserve. P.P.S no family members were fodder either.