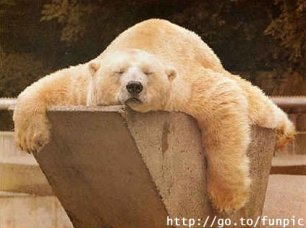 :( I really hope you're starting to feel better.

Never a good thing when a shark becomes a bear. Whatever's dragging you down, QOTKU, I hope you're on the mend. :(

Okay, Janet. What else did you get into at the Historical Conference that you're not telling us? Hm?

Teasing aside, I hope you're feeling better soon. We miss your voice.

So my puppy, this many days into my similarly-timed illness, has turned into a quivering ball of ill-contained energy. She mostly releases this energy if something changes, so if somebody else wakes up or comes home, and she gallops in a few laps around the living room, uses the couch as a half pipe, etc. Then her developing brain goes "wait! no!" which then allows her to hear all of us saying "hey! no!" and she manages to reach a state of decorum again. As a result, I've been letting her bark at the squirrels out back, which is normally not a deal. Barking and ignoring me = we're going back inside immediately. But, she's got energy to burn and I feel bad about it. There's only so much puzzle toys can do at this point (which is a lot, but they've been doing all the heavy lifting).

In other news, while waiting on my first readers, I've started taking some stabs at writing my query!

Jjennifer you need a Mr Red Dot. You know, the little laser cat toy? My dobie cannot contain himself when your hand even goes near it and once on, will run in circles until he drops trying to catch it. I can't even say "Mr Red Dot" in his presence because he knows what it is.

He sleeps for hours after :)

nightsmusic I got an Amazon gift card for Christmas and I think it's going towards a flirt pole! I was able to use a laser pointer with Elka because she understood where the light came from, and she understood when done was done. With Ulrike, she's persistent past reason sometimes, and I don't want to saddle her with a neurosis because of it!

I hope the Duchess has been snuggling - even if it's just to get Thumbs back to work. Hope you feel better soon!

Hope you've passed the low point and are climbing back to health.

Jennifer
I feel you about the puzzle toys. Flirt poles are godsends. My pups live for theirs.

When I was sick they survived off of their flirt pole and snuffle mats.

Megan V ooh, snuffle mats! I have seen them in action online, but have not made or bought one for Ulrike. She really likes gnawing on things far more than snuffling, so it would take a careful introductory process I think! I do feed her from a muffin tin sometimes, though, and put a ball or toy on top of the kibble piles. That takes her awhile!

Jennifer, that flirt pole? Murphy would just look at me like I'm nuts. We've taught him over time that when Mr Red Dot turns off, we're done. Once in a great while, if hubs is sitting next to it, his ears will perk up and he'll bounce a bit, but 'no' is 'no' and he's great. Now, you want to talk about neurosis with the fireplace, storms, strong winds, loud noises...any number of other things, he's a basket case, but that all came about after we lost Ciine. His confidence died with her.

Nightmusic-so sad that your pup lost his confidence, but so glad that he still gets to have tons of fun with his pup-parents :)