This Blog is going to the dogs, Day 13 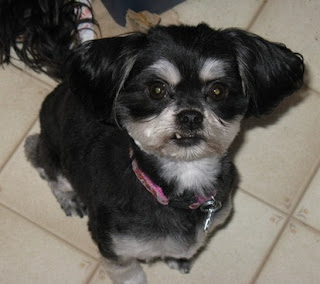 This is Little Girl Dog, ten pounds of solid energy. At nine years old, people still think she's a puppy, though she's starting to feel the humidity in her little joints. She loves nothing better than to run - chasing, being chased, or just running in ever-increasing circles. I decided to try to harness some of that energy by taking her to agility classes. She loved them.

The last day of class, the dogs had a chance to run through the course a few times. Now, one way to get a dog to run through those agility tunnels is to throw a treat in. I never had to do that with LGD. She just loved the running. But after a couple runs through the course, she may have been getting bored with it. She ran into the tunnel - and didn't come out. Where was she? I got down on my hands and knees to see, and there she was, sitting just out of reach, chawing on a treat that someone had thrown in there. Her teeth aren't exactly even, and she has a small mouth, so she tends to chew on one side, which makes her chewing look particularly forceful. The other participants looked at me as though I were nuts, while I'm laughing and calling her. Of course, she goes looking through the folds of the tunnel for more treats. I had to crawl into the tunnel to extract her so the other students could have their turn.

My dearly departed Koko had a similar last day of agility classes. Now, Koko was a bit OCD, and everything had to work the way he expected it to, or he would repeat that action until it did work. He surprised me the first run through by doing everything perfectly. Now, we're supposed to give them a treat every few obstacles. Well, on his third run-through, I guess I was remiss. I didn't give him a treat after a few obstacles. So instead of running to the next obstacle, he ran back a few obstacles, to the tunnel, and ran through it. Then he paused, looking at me. Then he ran through it again and paused, looking at me. And I realized that that obstacle was where I had last given him a treat. He ran through it over and over again, then just started running. I knew then I wouldn't get his concentration back to the course. We had to cut our run short then, too.

I can just envision LGD crookedly gnawing on whatever treats she had come upon (and I'm often the crazy lady standing and laughing with her dog, to the mystification of passers by)! And poor Koko on his repeating loop. I guess that whole "random rewards schedule" doesn't always work, does it.

I think I could listen to (read) agility class stories all day! I've never been to one myself (Elka would no doubt love them, but 1. it's hard to find any kind of trainers 'round these parts and 2. it's for the best that she not realize she can jump our picket fence), but I've read about them, watched them online, etc. They look like so much fun, for the owners and the dogs!

I bet I know who owns this little girl given the name, and the detailed comment. BJ!

So cute with her snaggle-toothed smile, and her colors - like a little bandit.

The agility story was funny. My sister in law has a dog that looks a lot like Little Girl Dog, named Mimi. I thought about her with the story about Koko repeating the cycle so he could get his treats. Mimi got to where she would beg to go outside to do her business, just so she could get a treat. When they were training her, that was the routine. Go outside, pee/poop = treat. It took a while to "untrain" that expectation!

This must be BJ's little dog. Oh my, she is so adorable. What a precious pup.

Good book - I'm reading How I Got Published Famous Authors Tell You in Their Own Words. It's heartening and hilarious.

Wonderful stories. Such cutie pie. And Koko too, what a great story of persistence and the need for routine!

I'm glad Donnaeve wrote something because I get the names mixed up for her dog and BJ's dog.

I haven't commented every day because I'm on the fly getting a kid settled in college, but I've enjoyed our little month of dogs. And our dog stories. If you haven't seen it yet, Janet added a great post on her Query Shark that you'll want to take a look at, too. Today's cutie must be a ShitZhu?

ack! That post on Query Shark is coming down in about two minutes cause
it was just back up for my presentation at Writers Digest Conference yesterday. If I couldn't get my computer to talk to the overhead projecter I wanted people to be able to see the handout on their computer or phone by logging on to QS.

Fortunately for all concerned the AV dudes at the Hilton Hotel are great,
and all went exactly to plan.

Thanks for the laughs and the cute photo!

I love watching agility training competitions. A friend shared a video of a champion Scottish Terrier running agility courses. The dog was amazing. This is really hilarious if you know Scotties. Obedience and training are not words usually associated with Scotties.
LGD is adorable.

Ah, the Queen popped in and out! I thought I heard a splash.

Exactly Lisa B - that's not my "Little Dog," who by Little Girl Dog's standards, ought to be called "Miniscule Dog." (he weighs 3.9 lbs)

Janet: Awww... I was going to put that in the Treasure Chest. Thought it might be useful.

Sweetheart? I see a good solid gleam of mischief in her eyes. I love dogs with a mind of their own and she shows hers. It looks like it is taking the form of a countdown. In another moment she was circling BJ's feet at a hundred miles and hour and daring her to try to get another picture.

BJ, remiss is a word that has struck me as belonging to you. I would have put that scenario down to part of the learning curve that all dog handlers work on. It is different for every dog and in every situation. I know that never happened again.

Little Girl Dog is a Shih Tzu/Bichon mix who started life with me as Little Girl Foster Dog, but two weeks later became mine.

I love agility. Unfortunately, it cost too much for us to do it except for a fun class once in awhile. That class with Koko was where we bonded - really bonded.

Panda: A friend of mine had his pug in agility. I saw a video. Now *that's* a sight!

Craig: Aww, thanks! Yes, I learned as much as Koko did there. And you've described Little Girl Dog exactly there. :)

Janet: It's always a relief when everything works. I'm glad your presentation went well. :)

Thanks for all the kind and happy comments on my little girl. I hope her picture and story brought you as many smiles as your comments brought me.

Off topic: Janet just posted the story of her hiring at New Leaf on Facebook. Great story, Janet, and congratulations again!

Aw. LGD's an adorable pup, BJ. Love the snaggle tooth. I'm sure she & Koko had lots of good times together!

And, Janet's voice! Glad to know you're still swimming these waters, even if eerily silent :)

Love the stories. Little Girl Dog is adorable, with perfect symmetry of colors on her face, and then that little snaggle tooth for personality.

Caption: Not just another pretty face.

Janet, congratulations. Great story on facebook. Bar chits might have been the better deal, although minions are nice perks.

I love these stories and I love this picture of LGD.

When I imagine Janet moving offices, I picture a minion pushing a liquor cart behind her to keep her well-provisioned in her new digs.

I totally missed the temporary QueryShark posting. Hopefully it'll be back one day, in one form or another!

I love the LGD.

Congratulations Janet. Did you repaint the new office? Maybe a spontaneous flash fiction contest is appropriate. I suggest 2 words: Leaf and reef.

Adib, it was the query template she posted last year. It is somewhere in the Archives.

The story sounds like a gloss job. I think there is more there but the answer is her business. I will respect my Queen's privacy. I know I have shorted the answer to many questions I didn't want to tell about.

I, too, missed the extra Query Shark post - but just caught your Facebook update. Congratulations on the new job! Agent-wrangling sounds fun, and a perfect fit for someone who mentors and inspires (and rips to shreds!) as well as Her Sharkliness does :D
Just one question though: have you added 'attention to detail in your many years of painting experience' to your minion-selection-criteria yet? Because, well, MINIONS!!!

Love that story about finding a treat in the tunnel! We took our rescued dogs to a shy dog class (they were kenneled/bred for the first three years of their lives) and the tunnel was one of the things we introduced them too. Sophied caught on pretty quickly, but her sister (mother? we're not sure) Chloe kept trying to go around the tunnel to get to me. Fnally, she just sat down and looked miserable, until I stuck my head in the tunnel and said the magic word, "Cheeeese." She was through that tunnel like a shot!

Love that, Angelica! The tunnel was Koko's favourite part. Luckily, despite Koko's not-so-good past and 'skittishness', he wasn't shy. Just very independent. And all the foster dogs loved that of him.

(I put 'skittishness' in scare quotes, because I guess the shelter he went to nearly put him down, saying he was too skittish to find a home. I'm so thankful that rescue stepped in. I never found him really skittish - except around thunder; he was normally such a calm, unassuming little guy.)

Hey Janet, regarding your 9:33 comment...are't you supposed to be taking a break?
Oh I get it, sharks never stop moving, sharks never sleep or so the victims say.

BJ, I'm happy that I now have a mental image to go with your stories about LGD. I love her eyebrows and perky ears and that high energy "bring it" look she has. Great stories about the agility classes. I'm trying to imagine any of the labs we've had participating in something like that and . . . nope.

You can't fool me, LGD. Beneath your hug-me Gizmo exterior lurks a mohawked gremlin named Stripe. The sneer gives you away.

Holy Shih Tzu! Little Girl Dog is a superhero in the cuteness department. Let the treats fall where they may. The victor is the one who stops and eats the spoils.