Lo, Beowulf and I go way back.

I didn't read it in draft form or anything, but I did beta-read the ms before it went to the final scribe.

When I was a fresh-faced dewy eyed sullen, sleepless, tuition-stricken undergrad, I had to switch my major from Math to English and History for reasons too hilarious to enumerate while you're still drinking coffee.

My first class in the new major was Survey of English Literature 101.

I thought I'd barely have to study to ace this. I'd been reading for awhile; I'd read Gone With the Wind 27 times.  How hard could this be?

Or was it the other way around?

I was wondering when we'd get to the real classics like Miss Marple.

But then I started reading. And listening to the professor. And then along came Grendel's mother. Now she was an adversary.

I even wrote a paper on why Rambo was a modern day Beowulf, something that started a lovely conversation with David Morrell many years later at ThrillerFest.

Years passed, but my love for Beowulf did not fade.

When the new Seamus Heaney translation hit the shelves I scooped up a copy, and read it over the course of a week.  Just as wonderful as I remembered.

Then one of my friends, who had a career as a soprano at the New York City Opera,  knowing my love of Beowulf, told me there would be a performance of it at Lincoln Center. I bought us two tickets at once.

The night arrived, we descended from our wheeled chariot, and settled in to our seats.

The first thing I noticed was that this theatre did not have Met Titles, the small screen that gives you the English words for the Italian opera being performed on stage.

Well, maybe they had an overhead screen like the NYC Opera. I wasn't worried. I knew this poem. I'd even re-read it to prep for this performance.

The lights come up.

A solitary actor is on stage.

Well, Grendel's ma doesn't come on stage in the first act, but where was the mead hall?

And to my dawning horror I realize it is being performed in Old English. Or maybe it's in Klingon. I couldn't tell.

I look around me.

No one else looks gobsmacked. Not even in the slightest.

In fact, they're LOVING it.

When I crawled out of my seat at the end of the ordeal my companion in culture was glowing with joy.

"Wasn't it just wonderful!!!" she exuded as only a true diva can.

I reached for my emergency flask to avoid answering.

And that writer fiends was my last interaction with Beowulf until I saw this glorious cover of the new translation by Maria Dahvan Headley. 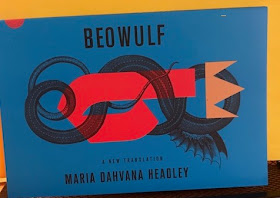 I will NOT be attending the performance should there be one.

Do you have any old favorites?