Recently, a writer sending a requested full included a blurb from a successful author, one whose name I recognized.  After sending my "got this, will read" reply, the writer wrote back asking if I'd noticed the blurb.

Yes I had.
And because he asked, I had to tell him why this was not only not a positive, it was actually a negative.

Asking a writer to read your manuscript for a blurb is asking a major favor of that writer. Six hours to read, and whatever time it takes to write the blurb. It's a BIG ask. Which means you get to make that ask exactly once.

(1) Writers who ask for blurbs at the query stage have squandered their opportunity to ask for a blurb on the finished manuscript.

And in case you're wondering, most manuscripts go through at least two revisions: notes from me before submission, and the editorial process with the editor after acquisition.  It's entirely possible the book you send as your requested full is a very different version of what will be published. There arises a very knotty ethical problem. The book the author blurbed isn't the one being published. That bothers me.

And because you've already asked, we can't use whatever inside track you had to get the blurb in the first place, for this new revised version.

That's one reason not to ask for blurbs at the query stage.

(2) The second is because if your first book doesn't sell, and you write a second or third, you've squandered your chance to ask Good Connection for a blurb on the new book.  Remember this is a Big Ask. You don't get two bites here. (By way of info, at least five of my writers queried me on books that were NOT the first books published)

(3) And the third reason? Published writers hate it. Ask at the wrong part of the process, and your chance to ask at the right part is reduced.

And if you think I'm overstating how much writers don't like this, check out the thread at @RGay's twitter feed that started with this 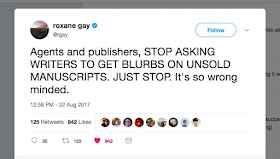 And the fourth reason?
(4) It's cause I don't care what anyone else thinks right now.
My opinion about your work, and my ability to sell it is the only thing that matters to me.

Bottom line: Any agent who asks for blurbs from established writers at the query stage is asking you to do something that's not in your best interest. Proceed accordingly.
at 7:00 AM
Share