Rejections sucks, no two ways about it, and it's particularly painful if you feel a connection to the agent. And, Twitter can make you feel connected; it's one of the things Twitter does best.

Thus it can be painful to see an agent chatting merrily away about this that and the other, after she's just (demonstrated her complete lack of taste and sense)  rejected your manuscript.

Of course you don't want to see her.

I suggest muting the agent rather than unfollowing. Unfollowing feels hostile to the recipient. Muting is invisible. She'll never know, and you'll never see her (unless you want to.)

On the other hand if, post rejection, you decide to just unfollow cause who the hell needs her anymore anyway, well, that's a fast way to shoot yourself in the foot with some agent. Not me of course, I won't even notice, cause I don't keep track of who follows me, but some agents do, and why alienate someone in a fit of pique particularly when voodoo dolls are cheaper, and much more painful?


But the larger question of whether to interact with agents on Twitter is a different kettle of fish. It can be a good way to establish a connection of sorts. It certainly doesn't hurt if I recognize your name if you send me a query.

What we all (agents and writers both) need to remember is that writers are woodland creatures, and agents are T-rex.  By that I mean a T-rex strolling around the forest looking for delicious kale to take home and stir fry makes a lot of noise, and rattles the woodlands. Woodland creatures are shaken, and madly flee the T-rex's feet.  What the T-rex sees as merely walking around, the woodland creatures see as impending doom. And neither of them are wrong.  It just depends on what size your feet are here.

Writers tend to watch every word an agent says, scouring every turn of phrase for clues. Agents on the other hand have been known to just...yanno...yammer. Twitter is more yammer than anything else, and if you're a writer you should NOT try to parse out tweets for hidden meanings unless it's overtly about publishing. (Hint: #pubtip, #queryTip #FusterCluck etc. are reliable indicators it's about publishing.)

So, can you be friends with a T-Rex? Sure. Carefully though. Very very carefully. 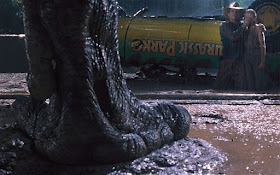